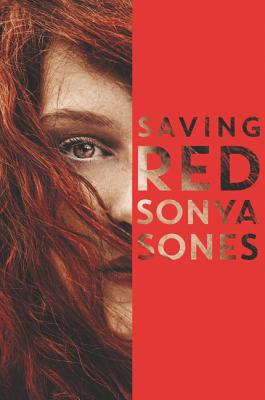 Sonya Sones, award-winning author of What My Mother Doesn’t Know, delivers a gripping, funny, and inspiring novel in verse about what happens when the person you set out to save ends up saving you.

Right before winter break, fourteen-year-old Molly Rosenberg reluctantly volunteers to participate in Santa Monica’s annual homeless count, just to get her school’s community service requirement out of the way.

But when she ends up meeting Red, a spirited homeless girl only a few years older than she is, Molly makes it her mission to reunite her with her family in time for Christmas. This turns out to be extremely difficult—because Red refuses to talk about her past.

There are things Molly won’t talk about either. Like the awful thing that happened last winter. She may never be ready to talk about that. Not to Red, or to Cristo, the soulful boy she meets while riding the Ferris wheel one afternoon.

When Molly realizes that the friends who Red keeps mentioning are nothing more than voices inside Red’s head, she becomes even more concerned about her well-being. How will Molly keep her safe until she can figure out a way to get Red home?

In Sonya Sones’s inspiring novel, two girls, with much more in common than they realize, give each other a new perspective on the meaning of family, friendship, and forgiveness.

Sonya Sones has written seven novels in verse: The Opposite of Innocent, Stop Pretending: What Happened When My Big Sister Went Crazy; What My Mother Doesn’t Know and its companion, What My Girlfriend Doesn’t Know; One of Those Hideous Books Where the Mother Dies; To Be Perfectly Honest; and Saving Red. Sonya’s books have received many honors, but she was especially thrilled when she learned that she was on the American Library Association’s list of the Most Frequently Challenged Authors of the 21st Century. She lives near the beach in California. You can visit her at www.sonyasones.com or write her at sonyasones@gmail.com.

“A new book from Sonya Sones is always an event, and Saving Red shows why. This tender, taut novel in verse is both wise and full of heart.” — Deb Caletti, National Book Award finalist and author of Essential Maps for the Lost

“Original. Heart-wrenching. A beautiful treatise on empathy and love. These characters belong to you-as your own friends-when you read their story. Saving Red is an absolute treasure.” — John Corey Whaley, Printz Award winner and National Book Award finalist

“Each carefully crafted poem comes together to paint a vivid picture of love, loss, and the hope and humor that’s caught in between. Saving Red soars and will speak to the hearts of teen readers everywhere.” — Dr. Rose Brock, Sam Houston State University

“A page-turning novel in verse about loss, grief, and redemption told in the voice of a wide-eyed, naive fourteen-year-old. A quick, accessible read for fans of emotional, character-driven titles.” — School Library Journal

“Sones tackles the topic of homelessness, runaways, and mental illness in another hard-hitting, but never overly dark, novel in verse. A beautiful window into the desperate futility of trying to save someone who doesn’t necessarily want to be saved.” — Booklist (starred review)