The Galaxy, and the Ground Within: A Novel (Wayfarers #4) (Paperback) 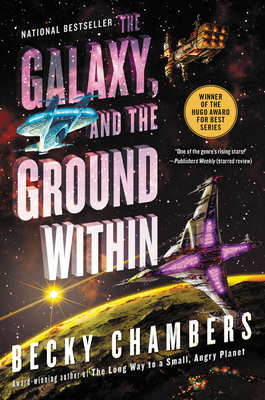 This is book number 4 in the Wayfarers series.

Return to the sprawling, Hugo Award-winning universe of the Galactic Commons to explore another corner of the cosmos—one often mentioned, but not yet explored—in this absorbing entry in the Wayfarers series, which blends heart-warming characters and imaginative adventure.

With no water, no air, and no native life, the planet Gora is unremarkable. The only thing it has going for it is a chance proximity to more popular worlds, making it a decent stopover for ships traveling between the wormholes that keep the Galactic Commons connected. If deep space is a highway, Gora is just your average truck stop.

At the Five-Hop One-Stop, long-haul spacers can stretch their legs (if they have legs, that is), and get fuel, transit permits, and assorted supplies. The Five-Hop is run by an enterprising alien and her sometimes helpful child, who work hard to provide a little piece of home to everyone passing through.

When a freak technological failure halts all traffic to and from Gora, three strangers—all different species with different aims—are thrown together at the Five-Hop. Grounded, with nothing to do but wait, the trio—an exiled artist with an appointment to keep, a cargo runner at a personal crossroads, and a mysterious individual doing her best to help those on the fringes—are compelled to confront where they’ve been, where they might go, and what they are, or could be, to each other.

Becky Chambers is a science fiction author based in Northern California. She is best known for her Hugo Award-winning Wayfarers series, which currently includes The Long Way to a Small, Angry Planet, A Closed and Common Orbit, and Record of a Spaceborn Few. Her books have also been nominated for the Arthur C. Clarke Award, the Locus Award, and the Women's Prize for Fiction, among others. Her most recent work is To Be Taught, If Fortunate, a standalone novella.

Becky has a background in performing arts, and grew up in a family heavily involved in space science. She spends her free time playing video and tabletop games, keeping bees, and looking through her telescope. Having hopped around the world a bit, she’s now back in her home state, where she lives with her wife. She hopes to see Earth from orbit one day.

“A story filled with heart-warming characters and intriguing connections. Chambers once again creates an epic space setting with a detailed, personal view of some of its inhabitants. Humor and heartache weave through her insightful prose and diverse characters.” — Library Journal (starred review)

"For fans of character-driven science fiction who are interested in how differences can be a source of strength, not weakness." — Booklist (starred review)