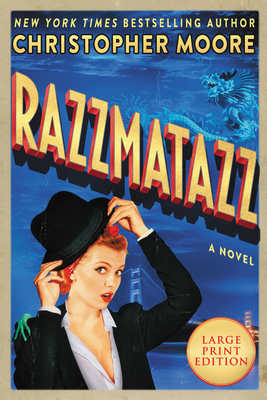 “Smart and funny and all sorts of raunchy in the best way.” — San Francisco Chronicle

San Francisco, 1947. Bartender Sammy “Two Toes” Tiffin and the rest of the Cookie’s Coffee Irregulars—a ragtag bunch of working mugs last seen in Noir—are on the hustle: they’re trying to open a driving school; shanghai an abusive Swedish stevedore; get Mable, the local madam, and her girls to a Christmas party at the State Hospital without alerting the overzealous head of the S.F.P.D. vice squad; all while Sammy’s girlfriend, Stilton (a.k.a. the Cheese), and her “Wendy the Welder” gal pals are using their wartime shipbuilding skills on a secret project that might be attracting the attention of some government Men in Black. And, oh yeah, someone is murdering the city’s drag kings and club owner Jimmy Vasco is sure she’s next on the list and wants Sammy to find the killer.

Meanwhile, Eddie “Moo Shoes” Shu has been summoned by his Uncle Ho to help save his opium den from Squid Kid Tang, a vicious gangster who is determined to retrieve a priceless relic: an ancient statue of the powerful Rain Dragon that Ho stole from one of the fighting tongs forty years earlier. And if Eddie blows it, he just might call down the wrath of that powerful magical creature on all of Fog City.

Strap yourselves in for a bit of the old razzmatazz, ladies and gentlemen. It’s Christopher Moore time.

“Smart and funny and all sorts of raunchy in the best way. . . Dazzles, entertains and squeezes in more than a few laughs. . . Razzmatazz is another success for Christopher Moore.” — San Francisco Chronicle

“Moore and his merry band of miscreants are firmly on the right side of history—and they will make you laugh until it hurts.” — BookPage (starred review)

"There is literally a laugh on every page of this book (several, on some pages), and with its fast-paces, deliberately helter-skelter storyline, it sinks its hooks deeply and never lets go." — Booklist

"A humorous romp. . . . Moore’s fans and those who like their noir with a side of slapstick and the supernatural will enjoy." — Publishers Weekly

“Razzmatazz is marked with the same sort of coarse charm that permeates all of Moore’s books. . . . There’s chaos at play throughout—there’s a LOT going on—yet Moore handles it deftly, resulting in a book whose myriad fractured storylines ultimately come together in a delightfully droll denouement.” — The Maine Edge

"Moore’s trademark humor is on full display with his cast of strangely lovable characters. This is Shakespeare with an edge and will not only appeal to Moore’s fans but garner new ones." — Library Journal (starred review) on Shakespeare for Squirrels

“Buckle in for Shakespeare for Squirrels, an uproarious take on Shakespeare’s A Midsummer Night’s Dream—transformed into a murder mystery. . . A funny, fast-paced, and wild read.”  — Huffington Post

"It takes a certain amount of guts and wild abandon to recast a Shakespeare comedy as a hard-boiled detective story, but if anyone can pull it off, it’s master satirist Moore, whose gift for funny business apparently knows no bounds. . . . A welcome return of a fan-favorite character in a romp of a tale that will delight not only mystery buffs but also fantasy fanatics, and, of course, Bard lovers." — Booklist (starred review) on Shakespeare for Squirrels

“Christopher Moore gives us dizzy dames and shadowy gangsters in Noir. Sammy, Moore’s comic revision of Sam Spade, will take you on a silly-thrilly ride through late-1940s San Francisco, and you’ll be laughing all the way.” — Washington Post

“[A] pedal-to-the-metal, exquisitely written comic romp through a neon-lit San Francisco that may never have actually existed, but that, in Moore’s supremely talented hands, sure feels like it could have.” — Booklist (starred review) on Noir