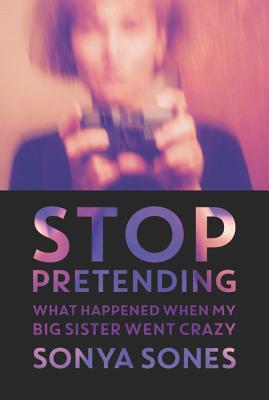 Continuously in print for nearly two decades, this groundbreaking and profoundly moving story told in verse, from award-winning author Sonya Sones, has been repackaged with a striking new cover and bonus content.

When her beloved older sister is hospitalized after a sudden mental breakdown, Cookie is left behind to cope with a family torn apart by grief, friends who shun her, and her fear that she, too, might one day lose her mind.

Based on award-winning author Sonya Sones’s own true story, this novel explores the chilling landscape of mental illness, revealing glimmers of beauty and of hope along the way. Told in a succession of short and powerful poems, it takes us deep into the cyclone of the narrator’s emotions: despair, anger, guilt, resentment, and ultimately, acceptance.

Sonya Sones has written seven novels in verse: The Opposite of Innocent, Stop Pretending: What Happened When My Big Sister Went Crazy; What My Mother Doesn’t Know and its companion, What My Girlfriend Doesn’t Know; One of Those Hideous Books Where the Mother Dies; To Be Perfectly Honest; and Saving Red. Sonya’s books have received many honors, but she was especially thrilled when she learned that she was on the American Library Association’s list of the Most Frequently Challenged Authors of the 21st Century. She lives near the beach in California. You can visit her at www.sonyasones.com or write her at sonyasones@gmail.com.

“The poems have a cumulative emotional power.” — ALA Booklist (starred review)

“The poems take on life and movement, the individual frames of a movie that in the unspooling become animated, telling a compelling tale.” — Kirkus Reviews

“This debut novel shows the capacity of poetry to record the personal and translate it into the universal.” — Chicago Tribune

“Stop Pretending is a tour de force debut. It celebrates truth-telling, and has a purity and passion that speaks to the heart.” — Boston Globe