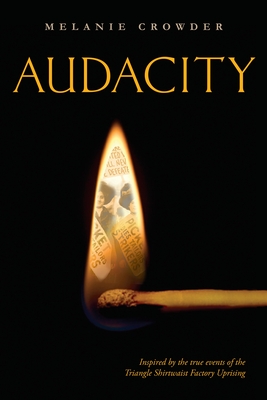 The inspiring story of Clara Lemlich, whose fight for equal rights led to the largest strike by women in American history

A gorgeously told novel in verse written with intimacy and power, Audacity is inspired by the real-life story of Clara Lemlich, a spirited young woman who emigrated from Russia to New York at the turn of the twentieth century and fought tenaciously for equal rights. Bucking the norms of both her traditional Jewish family and societal conventions, Clara refuses to accept substandard working conditions in the factories on Manhattan's Lower East Side. For years, Clara devotes herself to the labor fight, speaking up for those who suffer in silence. In time, Clara convinces the women in the factories to strike, organize, and unionize, culminating in the famous Uprising of the 20,000.

Powerful, breathtaking, and inspiring, Audacity is the story of a remarkable young woman, whose passion and selfless devotion to her cause changed the world.

Melanie Crowder (www.melaniecrowder.net) lives on the Colorado Front Range where she is a writer and educator. She teaches English to non-native-English-speaking students at her local school and holds an MFA in Writing from Vermont College of Fine Arts. Follow Melanie on Twitter at @MelanieACrowder.

* "With a thorough historical note, glossary of terms, and bibliography, this will make an excellent complement to units on women’s rights and the labor movement, but it will also satisfy readers in search of a well-told tale of a fierce heroine."--BCCB, starred review

* "This is an excellent title that can open discussions in U.S. history and economics courses about women’s rights, labor unions, and the immigrant experience."--School Library Connection, starred review

"Based on the true story of Clara Lemlich, Audacity throbs with the emotions of this exceptional young woman who fought for equal rights and improved labor standards in factories. Melanie Crowder’s verses spit out Clara’s rage, cradle her longing and soar like the birds that are her constant companions."--Bookpage

“Crowder’s (Parched) use of free verse in this fictionalization of Russian-Jewish immigrant Clara Lemlich’s life brings a spare poignancy to a familiar history.”--Publishers Weekly

“Audacity is an evocative reimagining of a fascinating historical figure who should be remembered for her determination in the face of great odds and powerful opposition—and for her role in changing America. Melanie Crowder’s powerful verse reveals a long-past world, but the combination of hope and outrage that Clara Lemlich brought to her struggle should be both recognizable and inspirational to teen readers longing to right the injustices of our day.”—Margaret Peterson Haddix, critically acclaimed, bestselling author of Uprising