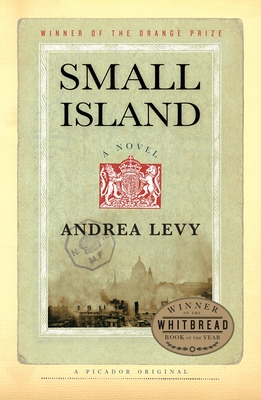 Hortense Joseph arrives in London from Jamaica in 1948 with her life in her suitcase, her heart broken, her resolve intact. Her husband, Gilbert Joseph, returns from the war expecting to be received as a hero, but finds his status as a black man in Britain to be second class. His white landlady, Queenie, raised as a farmer's daughter, befriends Gilbert, and later Hortense, with innocence and courage, until the unexpected arrival of her husband, Bernard, who returns from combat with issues of his own to resolve.

Told in these four voices, Small Island is a courageous novel of tender emotion and sparkling wit, of crossings taken and passages lost, of shattering compassion and of reckless optimism in the face of insurmountable barriers---in short, an encapsulation of that most American of experiences: the immigrant's life.

Born in London, England to Jamaican parents, Andrea Levy (1956-2019) was the author of Small Island, winner of the Whitbread Award (now Costa Award), the Orange Prize for Fiction (now Women’s Prize for Fiction), and the Commonwealth Writers’ Prize. The BBC Masterpiece Classic television adaptation of her novel won an International Emmy for best TV movie/miniseries.

Andrea’s other books include the Man Booker Prize finalist The Long Song, also adapted by the BBC for television, and Fruit of the Lemon, among others.

“It's all here: exceptional dialogue, clever narrative, and a rich story that tells us something new about our shared history on a planet that is increasingly small and yet will always be inhabited by individuals possessed, at our best, by singular consciousness and desire.” —Star Tribune (Minneapolis)

“There is a great skill in the way she presents characters and dialogue; she has powers of observation and an ear for language that make her books a pleasure to read.” —Times Literary Supplement (UK)

“Andrea Levy gives us a new, urgent take on our past.” —Vogue

“A perfectly crafted tale of crossed lives and oceans . . . Happily, the hype is warranted--Small Island is a triumph.” —San Francisco Chronicle

“Levy tells a good story, and she tells it well--using narrative voices across time and space as she revisits the conventions of the historical novel and imagines the hopes and pains of the immigrant's saga anew.” —The Washington Post