Lair of Dreams: A Diviners Novel (The Diviners #2) (Paperback) 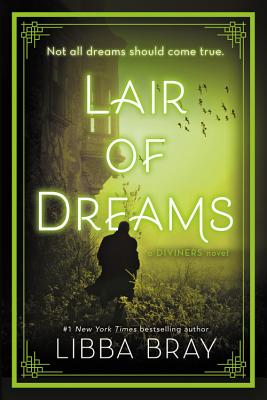 This is book number 2 in the The Diviners series.

The longing of dreams draws the dead, and this city holds many dreams.

After a supernatural show down with a serial killer, Evie O'Neill has outed herself as a Diviner. With her uncanny ability to read people's secrets, she's become a media darling and earned the title "America's Sweetheart Seer." Everyone's in love with the city's newest It Girl... everyone except the other Diviners.

Piano-playing Henry Dubois and Chinatown resident Ling Chan are two Diviners struggling to keep their powers a secret--for they can walk in dreams. And while Evie is living the high life, victims of a mysterious sleeping sickness are turning up across New York City.

As Henry searches for a lost love and Ling strives to succeed in a world that shuns her, a malevolent force infects their dreams. And at the edges of it all lurks a man in a stovepipe hat who has plans that extend farther than anyone can guess... As the sickness spreads, can the Diviners descend into the dreamworld to save the city?

Praise for LAIR OF DREAMS:
* "Bray illuminates the dark side of the American Dream in her long-awaited sequel to The Diviners, weaving xenophobia, industrial progress, Jazz Age debauchery, government secrets, religious fervor, and supernatural horror into a sprawling and always entertaining narrative."—Publishers Weekly, starred review

* "Bray weaves connections between her numerous characters and explores friendships, dark secrets, and dramatic love interests. This book will fly off the shelves to fans of Bray, Cassandra Clare, and the supernatural."—VOYA, starred review

* "The ambitiously broad focus of this novel strikes just the right balance in its division of narrative might, developing each of the dizzyingly large cast of diverse characters with an impressive attention to detail and with period-specific, witty dialogue."—Kirkus Reviews, starred review

"Sweet relationships (romantic, platonic, and familial) and snarky banter filled with period slang balance and accentuate the suspenseful horror. Fan will barrel through this second installment and emerge impatient for the next."—Horn Book