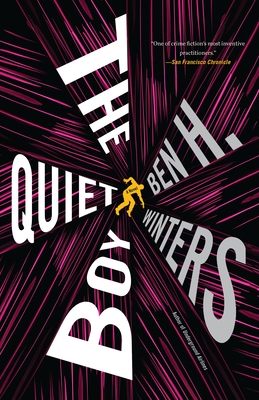 From the "inventive...entertaining and thought-provoking" (Charles Yu) New York Times-bestselling author of Underground Airlines and Golden State, this sweeping legal thriller follows a sixteen-year-old who suffers from a neurological condition that has frozen him in time—and the team of lawyers, doctors, and detectives who are desperate to wake him up.

In 2008, a cheerful ambulance-chasing lawyer named Jay Shenk persuades the grieving Keener family to sue a private LA hospital. Their son Wesley has been transformed by a routine surgery into a kind of golem, absent all normal functioning or personality, walking in endless empty circles around his hospital room.  In 2019, Shenk—still in practice but a shell of his former self—is hired to defend Wesley Keener’s father when he is charged with murder . . . the murder, as it turns out, of the expert witness from the 2008 hospital case. Shenk’s adopted son, a fragile teenager in 2008, is a wayward adult, though he may find his purpose when he investigates what really happened to the murdered witness.

Two thrilling trials braid together, medical malpractice and murder, jostling us back and forth in time.

The Quiet Boy is a book full of mysteries, not only about the death of a brilliant scientist, not only about the outcome of the medical malpractice suit, but about the relationship between children and their parents, between the past and the present, between truth and lies.  At the center of it all is Wesley Keener, endlessly walking, staring empty-eyed, in whose quiet, hollow body may lie the fate of humankind.

Ben H. Winters is the New York Times bestselling author of Underground Airlines and the Last Policeman trilogy. The second novel in the trilogy, Countdown City, was an NPR Best Book of 2013 and the winner of the Philip K. Dick award. The Last Policeman was the recipient of the 2012 Edgar Award, and was also named one of the Best Books of 2012 by Amazon.com and Slate. Ben lives with his family in Los Angeles, CA.

"I get excited any time Ben Winters has a new book coming out. His writing is so intelligent, his worlds so inventive, and his novels have a rare combination of being equally entertaining and thought-provoking. I will read anything by Ben Winters, and am always eager to see what he does next."
—Charles Yu, National Book Award-winning author of INTERIOR CHINATOWN

“The always-surprising Ben H. Winters writes books that combine genres, infusing the realistic with the fantastical. . . . Winters is such a fine writer that by the time he asks you to suspend your disbelief, you’ll follow him anywhere."—Sarah Lyall, New York Times Book Review

"The Quiet Boy is an utterly enthralling read. It is a novel with a philosophical spine, a tender pulse and prose propelled by rocket fuel. An eerie mystery, a captivating legal thriller, and an examination of the lengths we will go to for the ones we love, Winters infuses this page-turner with a graceful contemplation of humanity and our inner wiring. The Quiet Boy kept me guessing until the very end.”
—Kira Jane Buxton, author of Hollow Kingdom

"I'm a huge fan of Ben H. Winters! This book is wonderfully dark and thoughtful and deeply humane, while at the same time it's a riveting page-turner. I'm in awe of how good this guy is!"
—Dan Chaon, bestselling and National Book Award-nominated author of Ill Will

“THE QUIET BOY is a multi-genre delight: part sci-fi, part legal drama, and part detective novel, with all of it infused with insight, wisdom, and humor. And at the core of the novel are the beautiful portraits of an unusual father and an unusual son and their story of love lost and then regained.”—Jonathan Ames, author of A MAN NAMED DOLL and creator of Bored to Death

"a page-turner with a heart and soul."—Alta

"An entertaining concoction with plenty of twists on the way to a nicely unexpected resolution."—Kirkus Reviews

“Winters has proved himself to be one of our most fascinating genre blenders of crime and speculative fiction, a writer who never fails to challenge his readers to embrace new ideas and new forms of reality. A wonderful, thoughtful book.”—Booklist

"Ben Winters is know for his quiet, noir takes on science fiction and alternative history, but his latest goes in an entirely new direction as Winters looks at the long consequences of a botched medical procedure and explores the nature of vengeance."—CrimeReads

“a genre splicer, taking what he likes from every kind of book and braiding it all together to create his own species of fiction.”—Publishers Weekly