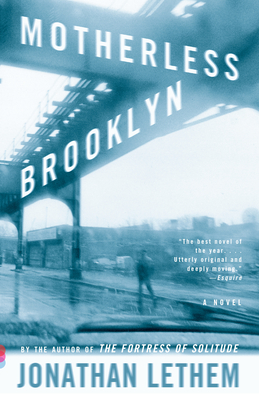 "A half-satirical cross between a literary novel and a hard-boiled crime story narrated by an amateur detective with Tourette's syndrome.... The dialogue crackles with caustic hilarity.... Unexpectedly moving." —The Boston Globe

But when Frank is fatally stabbed, one of Lionel's colleagues lands in jail, the other two vie for his position, and the victim's widow skips town. Lionel's world is suddenly topsy-turvy, and this outcast who has trouble even conversing attempts to untangle the threads of the case while trying to keep the words straight in his head.

Motherless Brooklyn is a brilliantly original, captivating homage to the classic detective novel by one of the most acclaimed writers of his generation.

Jonathan Lethem is the author of six novels, including the best sellers The Fortress of Solitude, which was a New York Times Book Review Editors' Choice for one of the best books of 2003, and Mother Brooklyn, which won the National Book Critics Circle Award and was named novel of the year by Esquire, McSweeney's, Tin House, The New York TImes, the Paris Review, and a variety of other periodicals and anthologies. He lives in Brooklyn, New York, and in Maine.

"The best novel of the year. . . . Utterly original and deeply moving." --Esquire

"Philip Marlowe would blush. And tip his fedora." --Newsweek

"Finding out whodunit is interesting enough, but it's more fun watching Lethem unravel the mysteries of his Tourettic creation. In this case, it takes one trenchant wordsmith to know another." --Time

"Immerses us in the mind's dense thicket, a place where words split and twine in an ever-deepening tangle." --The New York Times Book Review

"Who but Jonathan Lethem would attempt a half-satirical cross between a literary novel and a hard-boiled crime story narrated by an amateur detective with Tourette's syndrome?...The dialogue crackles with caustic hilarity...Jonathan Lethem is a verbal performance artisit...Unexpectedly moving." --The Boston Globe

"With one unique and well-imagined character, Jonathan Lethem has turned a genre on its ear. He doesn't just push the envelope, he gives it a swift kick... A tour de force." --The Denver Post