Max Jacob: A Life in Art and Letters (Hardcover) 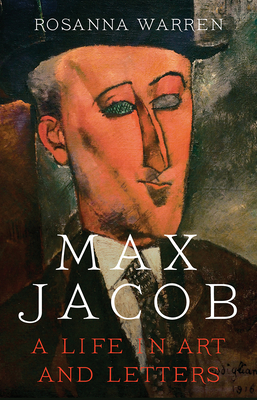 A comprehensive and moving biography of Max Jacob, a brilliant cubist poet who lived at the margins of fame.

Though less of a household name than his contemporaries in early twentieth century Paris, Jewish homosexual poet Max Jacob was Pablo Picasso’s initiator into French culture, Guillaume Apollinaire’s guide out of the haze of symbolism, and Jean Cocteau’s loyal friend. As Picasso reinvented painting, Jacob helped to reinvent poetry with compressed, hard-edged prose poems and synapse-skipping verse lyrics, the product of a complex amalgamation of Jewish, Breton, Parisian, and Roman Catholic influences.

In Max Jacob, the poet’s life plays out against the vivid backdrop of bohemian Paris from the turn of the twentieth century through the divisions of World War II. Acclaimed poet Rosanna Warren transports us to Picasso’s ramshackle studio in Montmartre, where Cubism was born; introduces the artists gathered at a seedy bar on the left bank, where Max would often hold court; and offers a front-row seat to the artistic squabbles that shaped the Modernist movement.

Jacob’s complex understanding of faith, art, and sexuality animates this sweeping work. In 1909, he saw a vision of Christ in his shabby room in Montmartre, and in 1915 he converted formally from Judaism to Catholicism—with Picasso as his godfather. In his later years, Jacob split his time between Paris and the monastery of Benoît-sur-Loire. In February 1944, he was arrested by the Gestapo and sent to Drancy, where he would die a few days later.

More than thirty years in the making, this landmark biography offers a compelling, tragic portrait of Jacob as a man and as an artist alongside a rich study of his groundbreaking poetry—in Warren’s own stunning translations. Max Jacob is a nuanced, deeply researched, and essential contribution to Modernist scholarship.

Rosanna Warren is the author of six poetry collections and a volume of critical essays. She has won the Lamont Poetry Prize and has received awards from the American Academy of Arts and Letters and the Guggenheim Foundation, among other honors. She teaches at the University of Chicago and lives in Chicago.

[Warren] painstakingly reconstructs the scene of an entire generation of artists and writers through Jacob’s eyes. The level of detail she marshals is impressive... Her greater achievement, however, is her portrait of the tension among art, faith and sexuality in [Jacob's] life... Warren wears many hats—translator, critic, chronicler—to resuscitate a richly contradictory figure and to give him a seat at the table.
— Ayten Tartici - New York Times Book Review

Being a distinguished poet herself, Warren pays particularly close attention to the richness of Jacob’s language... [Max Jacob] is definitive and chockablock with entertaining anecdotes.

[A] lively literary biography... Jacob was a Zelig of Paris’s bohemian demimondes, but Warren also makes a case for the importance of his ecstatic prose poems and cabaret verse, which appear in her own deft translations.
— The New Yorker

Rosanna Warren’s impressive achievement allows us to accept, and maybe even to fall in love with, an almost forgotten French writer.
— Phil Gambone - Gay and Lesbian Review

Brilliant... Warren’s narrative everywhere glows with the ease and compassion of having lived with her research for many, many years... Max Jacob will likely stand as the definitive English-language life of this perennially enigmatic figure.

Rosanna Warren’s Max Jacob is both monumental and intimate, a long-awaited portrait of a highly influential artist who haunts any account of early modernism…Max Jacob led a raucous, poignant, and mysterious life movingly illuminated in this elegant and passionate biography.

— Honor Moore, author of Our Revolution

This radiant book will make you love Max Jacob, as his best friend and protégé Picasso undoubtedly did and as Rosanna Warren clearly does. Warren is completely at home in all three of Jacob’s fascinating worlds: first, and most importantly, on the page in brilliant verse and prose; second, in Paris, from the heady rise of Modernism to France’s ignominious capitulation to Hitler; and third, in the mystical world, to which Jacob was deeply committed. Scrupulously researched and deftly written, Max Jacob is a joy to read.

— Christopher Benfey, author of If

Max Jacob, one of the great French avant-garde poets of the early twentieth century, remains surprisingly little known in the English-speaking world. Poet Rosanna Warren’s dazzling biography, based on decades of research and superb critical insight, has now made up for this neglect. Max Jacob reads like an absorbing novel but is also superb reportage and literary history. Anyone interested in the brilliant but contradictory period when Paris was the capital of world art will want to read Rosanna Warren’s biography.

Only a poet, artist, translator, and classicist could have written this totally engaging account of the many-sided Max Jacob. We meet a host of artists we have known about elsewhere, and here they come vividly to life, and some to death; poets we might have thought we knew well, we know again. Max Jacob deserves these thirty years of impassioned thinking and superbly delicate, forceful writing. As poetry surely dwelt in him, poetry dwells no less in Rosanna Warren.
— Mary Ann Caws, author of Creative Gatherings

Max Jacob led a life of allegory, as Keats would have called it. All the glory and barbarism of the twentieth century are summed up in his fortune and fate. Rosanna Warren has brought a poet’s eloquence and a historian’s doggedness to bear in this heartbreaking tale. Her book’s humanity is commensurate with her hero’s. She has given us a masterpiece of life writing.
— Benjamin Taylor, author of Here We Are