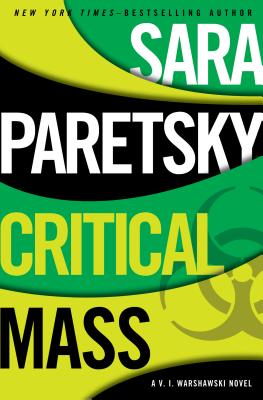 Called a "career-crowning triumph" and named one of the the top 50 mysteries and thrillers of the last 5 years by the London Sunday Times, Sara Paretsky is back with Critical Mass the latest entry in the VI Warshawski series,
"Vic is at her stubborn, reckless, compassionate best in this complicated page-turner about selfish secrets passed down through generations. Paretsky has been on a roll lately, her long-running, trailblazing series at its most dynamic since the early days." BooklistonCritical Mass

V.I. Warshawski's closest friend in Chicago is the Viennese-born doctor Lotty Herschel, who lost most of her family in the Holocaust. Lotty escaped to London in 1939 on the Kindertransport with a childhood playmate, Kitty Saginor Binder. When Kitty's daughter finds her life is in danger, she calls Lotty, who, in turn, summons V.I. to help. The daughter's troubles turn out to be just the tip of an iceberg of lies, secrets, and silence, whose origins go back to the mad competition among America, Germany, Japan and England to develop the first atomic bomb. The secrets are old, but the people who continue to guard them today will not let go of them without a fight.

Sara Paretsky is the author of nineteen books, including her renowned V. I. Warshawski novels. She was named 2011 Grand Master by the Mystery Writers of America, and is also the recipient of the Cartier Diamond Dagger Award given by the British Crime Writers Association. She lives in Chicago."

Praise for CRITICAL MASS   “Critical Mass proves that this gifted author is still, justifiably, a star. …Paretsky has an impressive knack for weaving gripping history into her swift plot.” —The Seattle Times   “There are plenty of women among the ranks of genre authors, but not many like Sara Paretsky, whose intellectually lively mysteries featuring her gutsy Chicago private eye, V.I. Warshawski, are fired by political causes and feminist social issues….Paretsky makes us feel both her own love for science and her fury at the way women like Martina have been denied the pursuit of their passion.”                         —Marilyn Stasio, New York Times Book Review   “As usual, V.I.’s quest is fraught with plenty of danger and white-knuckle moments. … It is as much a breathless mystery as a historical delving into science and wartime academic politics. An intellectual mystery that will please the author’s many fans.” —Library Journal   “V.I. has a charismatic and blistering way of bringing old secrets to light.”  – Kirkus   “Stellar…Paretsky builds suspense by deftly weaving the contemporary narrative with flashbacks.”                         —Publishers Weekly (starred review)   “Paretsky has been on a roll lately, her long-running, trailblazing series at its most dynamic since the early days.”                                     —Booklist (starred review)