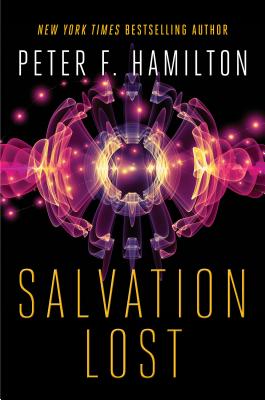 This is book number 2 in the The Salvation Sequence series.

All the best in humanity rises to meet a powerful alien threat in the sequel to Salvation—part of an all-new trilogy from “the owner of the most powerful imagination in science fiction” (Ken Follett).

The comparative utopia of twenty-third-century Earth is about to go dreadfully awry when a seemingly benign alien race is abruptly revealed to be one of the worst threats humanity has ever faced. Driven by an intense religious extremism, the Olyix are determined to bring everyone to their version of God as they see it. But they may have met their match in humanity, who are not about to go gently into that good night or spend the rest of their days cowering in hiding. As human ingenuity and determination rise to the challenge, collective humanity has only one goal—to wipe this apparently undefeatable enemy from the face of creation. Even if it means playing a ridiculously long game indeed.

But in a chaotic universe, it is hard to plan for every eventuality, and it is always darkest before the dawn.

Peter F. Hamilton is the author of numerous novels, including Salvation, A Night Without Stars, The Abyss Beyond Dreams, Great North Road, The Evolutionary Void, The Temporal Void, The Dreaming Void, Judas Unchained, Pandora’s Star, Misspent Youth, Fallen Dragon, and the acclaimed epic Night’s Dawn trilogy: The Reality Dysfunction, The Neutronium Alchemist, and The Naked God. He lives with his family in England.

“How far ‘space opera’ has come! The Old Masters of sci-fi would admire the scope and sweep of Salvation.”—The Wall Street Journal

“[A] vast, intricate sci-fi showstopper . . . The journey grips just as hard as the reveal.”—Daily Mail (U.K.)

“Dynamic, multifaceted characters, strong mind-expanding concepts, and impressive flair for language [make Salvation a] rare celestial event. . . . One of Britain’s bestselling sci-fi authors has launched an addictive new book as the initial stage of what is sure to be an intriguing new series called The Salvation Sequence.”—SyFyWire

“[Salvation is] a bravura performance from start to finish. . . . Hamilton is juggling chainsaws while simultaneously doing needlepoint over a shark tank. It’s a virtuoso treat, and I for one can hardly wait for Salvation Lost.”—Paul Di Filippo, Locus

“Peter F. Hamilton is known as one of the world’s greatest sci-fi writers for a reason. . . . Salvation is well worth the effort and a great introduction to some good old-fashioned space opera.”—Fantasy Book Review

“Peter F. Hamilton smashes through the crazy battlefield of space opera like a giant all-conquering war-robot. His newest is loud, proud, and beyond epic. Accept no substitutes, this is the real deal. You need Salvation, my friend. Everyone needs salvation.”—Ian McDonald

“No one offers action-packed, meticulous, suspenseful, and consistent high-tech futures better than Peter Hamilton, and Salvation cranks all of that up five notches.”—David Brin

“[An] epic galaxy-spanning conflict . . . Told in a quick-reading style with humor, a depth of character, and a cunning plot, Salvation Lost nicely sets up the conflict for the series finale.”
—Booklist

"The pacing is swift, with spectacular action, thoughtful strategies, eye-popping ideas, and Hamilton's usual attention to detail, all woven into a taut, gripping narrative."
—Kirkus Reviews

“Everything readers of Salvation will have hoped for.  A series emerging as a modern classic.”
—Stephen Baxter

“I found myself gripped by Salvation Lost, as I devoured it right to the scintillating end. Earth-invaded/humanity-enslaved stories usually put Homo sapiens through the wringer—and Hamilton ratchets that up and then some. This is vertiginous in its scale, covering vast tracts of time and space, and mind-bending as it examines new frontiers of human physicality. This is a dazzling tale of humanity face-to-face and toe-to-toe with the ultimate enemy!”
—Michael Cobley