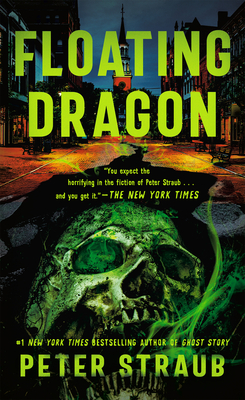 The quiet suburban town of Hampstead is threatened by two horrors. One is natural. The hideous unstoppable creation of man’s power gone mad. The other is not natural at all. And it makes the first look like child’s play...

“Straub’s effects are quite spectacular…I was fairly awed by some of the more nightmarish scenes in Floating Dragon.”—The New York Times

Peter Straub was the author of seventeen novels, which have been translated into more than twenty languages. They include Ghost Story, Koko, Mr. X, In the Night Room, and two collaborations with Stephen King, The Talisman and Black House. He wrote two volumes of poetry and two collections of short fiction, and he edited the Library of America’s edition of H. P. Lovecraft: Tales and the Library of America’s two-volume anthology, American Fantastic Tales.

In all, Straub’s books and stories were nominated for a dozen World Fantasy Awards, winning four, and 14 Bram Stoker Awards, with ten wins, among many other award nominations. He was named a World Horror Grandmaster in 1997, was given the Horror Writers Association's Lifetime Achievement Award in 2005, was named an International Horror Guild Living Legend in 2008, and received the World Fantasy Convention's Life Achievement Award in 2010. Straub was on the Locus Science Fiction Foundation board of directors for several decades. He passed away in 2022.

“Here is a novel guaranteed to double the national nightmare quotient, so watch out.”—Cosmopolitan

“Buy it today. Anything by Straub is worth several thousand John Sauls and a million V.C. Andrewses.”—Philadelphia Inquirer

“A book that positively bubbles with invention, jammed with characters, color, events, hackle-raising twists of fate, horrific monsters, terrifying nightmares, and a reality that shimmers and shifts as much as the noxious stream from a witch’s cauldron.”—Book World