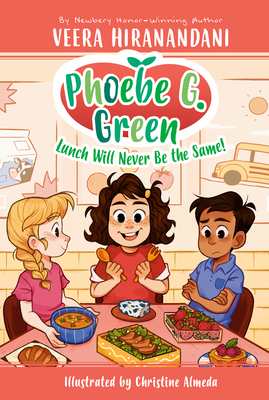 This is book number 1 in the Phoebe G. Green series.

Phoebe G. Green has never given much thought to food, but when a new French classmate enters the cafeteria with a lunchbox full of unusual foods, a new love is born. Spunky and likable, Phoebe is a budding foodie who's sure to win over your heart--and stomach!

Phoebe loves her pet fish, Betty #2 (named after Betty #1, may she rest in peace), making lists, and her best friend Sage. But when Camille, a tall French girl, arrives at school with unusual lunches, Phoebe can't seem to think about anything else, including her friendship with Sage. Thanks to Camille, Phoebe discovers goat cheese, butter lettuce, and cilantro (although she's convinced that's not a real word). She's determined to get invited to her new friend's house for dinner to see what other mysterious food Camille eats. But what about Sage? Can Phoebe make a new friend and keep an old one?

Veera Hiranandani is the author of The Night Diary (Kokila), which received the 2019 Newbery Honor Award, the 2019 Walter Dean Myers Honor Award, and the 2018 Malka Penn Award for Human Rights in Children's Literature. The Night Diary has been featured on NPR's Weekend Edition, is a New York Times Editor's Choice Pick, and was chosen as a 2018 Best Children's Book of the Year by The New York Times, The Washington Post, NPR, Amazon, School Library Journal, and Kirkus Reviews, among others. She is also the author of The Whole Story of Half a Girl (Yearling), which was named a Sydney Taylor Notable Book and a South Asian Book Award Finalist. She earned her MFA in fiction writing at Sarah Lawrence College. A former book editor at Simon & Schuster, she now teaches creative writing at Sarah Lawrence College's Writing Institute and is working on her next novel.

Christine Almeda is a Filipino-American freelance illustrator from NJ/NYC, and is the illustrator for Scholastic's Sarai Gonzalez series. She graduated from Montclair State University, earning a BFA and an Award for Excellence in Animation & Illustration, focusing on children's media. Christine believes in the power of storytelling and that art has the ability to make life a little more beautiful.

"Hiranandani has a light touch when exploring the friendship issues of these three likable characters. Nothing is over-the-top, and the plot is fun and easy to understand for the newest chapter-book readers... With all the foodies out there, this delightful series deserves a long shelf life… and many more courses."–-Kirkus Reviews

"The plot is engaging and easy to follow... Fans of Junie B. Jones and Judy Moody or those who like realistic fiction and friendship stories will enjoy this chapter book."--School Library Journal

"This is a splendid attempt to convey several lessons about growing pains to young readers, with age-appropriate humor via an outspoken, lovable, take-charge narrator."--Booklist