A Wolf for a Spell (Hardcover) 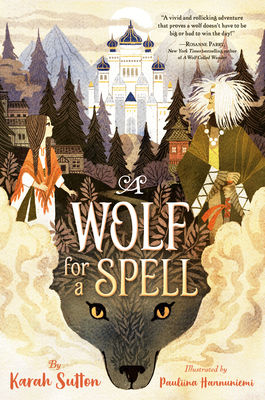 “This is the story of a wolf, a witch, and a girl who love the forest but fear each other. The forest is a wild, dangerous place full of wondrous magic, and it is threatened by the kind of men who must destroy what they cannot control. Told through three perspectives, this delicately woven fairy tale speaks to learning to trust others and being brave in doing what’s right. Spells are cast, but it is the connections formed that are truly magical.”
— Sarah Chanis, Changing Hands, Tempe, AZ

The Girl Who Drank the Moon meets Pax in this fantastical tale of a wolf who forms an unlikely alliance with Baba Yaga to save the forest from a wicked tsar.

Since she was a pup, Zima has been taught to fear humans--especially witches--but when her family is threatened, she has no choice but to seek help from the witch Baba Yaga.

Baba Yaga never does magic for free, but it just so happens that she needs a wolf's keen nose for a secret plan she's brewing . . . Before Zima knows what's happening, the witch has cast a switching spell and run off into the woods, while Zima is left behind in Baba Yaga's hut--and Baba Yaga's body!

Meanwhile, a young village girl named Nadya is also seeking the witch's help, and when she meets Zima (in Baba Yaga's form), they discover that they face a common enemy. With danger closing in, Zima must unite the wolves, the witches and the villagers against an evil that threatens them all.

"Karah Sutton has crafted a vivid and rollicking adventure that proves a wolf doesn't have to be big or bad to win the day!" --Rosanne Parry, New York Times bestselling author of A Wolf Called Wander

Karah Sutton has loved Baba Yaga, ballet, and blini ever since she had to do a research project on her Russian heritage in the third grade. Her hunger for adventure inspired her to move from Kentucky to New Zealand, where it was rumored she would find talking trees and the occasional wood elf. Karah spent four years as a bookseller before she turned to writing her own fiction. A Wolf For a A Spell is her first novel.

Pauliina Hannuniemi is a Finnish illustrator with her Bachelor of Arts from Metropolia UoAS. This is her first book.

"Karah Sutton has crafted a vivid and rollicking adventure that proves a wolf doesn’t have to be big or bad to win the day!” —Rosanne Parry, New York Times bestselling author of A Wolf Called Wander

"An elegant fairy tale retelling that feels both classic and fresh, A Wolf for a Spell beautifully explores the power of generosity, the many ways to be brave, and the magic of finding your own pack. This book is beautiful.” —Anne Ursu, award-winning author of The Lost Girl

"Those who have never before ventured into the deep, dark magic of Baba Yaga’s hut will find themselves entranced by Sutton’s engaging style and imagination." —Sofiya Pasternak, award-winning author of Anya and the Dragon

"This delightfully magical tale is filled with everything readers of fantasy and fairy-tale retellings adore: magic, heroism, and whimsy.... Not to be missed. —School Library Journal, starred review

“Sutton weaves together the three protagonist's storylines with skill, building toward an exciting denouement…. [A] warmhearted take on a Russian fairytale.” —Booklist