Shirley Chisholm Dared: The Story of the First Black Woman in Congress (Hardcover) 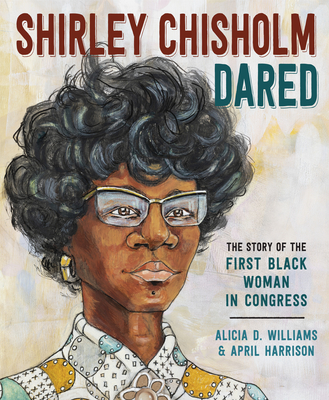 Discover the inspiring story of the first black woman elected to Congress and to run for president in this picture book biography from a Newbery Honor-winning author and a Coretta Scott King-John Steptoe New Talent Award-winning illustrator.

Meet Shirley, a little girl who asks way too many questions! After spending her early years on her grandparents' farm in Barbados, she returns home to Brooklyn and immediately makes herself known. Shirley kicks butt in school; she breaks her mother's curfew; she plays jazz piano instead of classical. And as a young adult, she fights against the injustice she sees around her, against women and black people. Soon she is running for state assembly...and winning in a landslide. Three years later, she is on the campaign trail again, as the first black woman to run for Congress. Her slogan? "Fighting Shirley Chisholm--Unbought and Unbossed!" Does she win? You bet she does.

April Harrison, a renowned folk artist, is the Coretta Scott King-John Steptoe New Talent Award-winning illustrator of Patricia C. McKissack's final picture book, What Is Given from the Heart, which received four starred reviews and which the New York Times Book Review called an "exquisite story of generosity." Most recently, she illustrated Nana Akua Goes to School by Patricia Elam Walker. Her work appears in the public collections of Vanderbilt University, Virginia Commonwealth University Medical Center, the Atlanta Housing Authority, and the Erskine University Museum and in many private collections.

“An engaging account of Chisolm’s life…. This one is a cut above the rest." --School Library Journal

"Created with acrylics and mixed-media collage, Harrison’s striking illustrations are notable for her use of line, color, and pattern. A handsome picture-book biography.” –-Booklist

“A timely and inspiring biography of a great woman who broke barriers and used her voice to elevate those around her.” --Kirkus

“Root[s] Chisholm in scene after scene as a pillar of self-assurance, equally unfazed by the acclaim, indifference, or opposition of the people around her.” --The Bulletin