Confidence Man: The Making of Donald Trump and the Breaking of America (Hardcover) 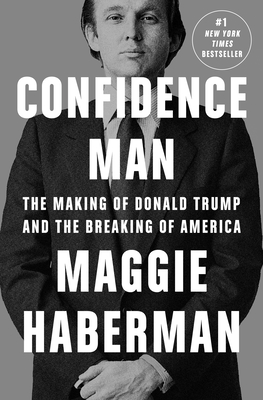 “This is the book Trump fears most.” - Axios

“Will be a primary source about the most vexing president in American history for years to come.” - Joe Klein, The New York Times

From the Pulitzer-Prize-winning New York Times reporter who has defined Donald J. Trump's presidency like no other journalist, Confidence Man is a magnificent and disturbing reckoning that chronicles his life and its meaning from his rise in New York City to his tortured post-presidency.

Few journalists working today have covered Donald Trump more extensively than Maggie Haberman. And few understand him and his motivations better. Now, demonstrating her majestic command of this story, Haberman reveals in full the depth of her understanding of the 45th president himself, and of what the Trump phenomenon means.

Interviews with hundreds of sources and numerous interviews over the years with Trump himself portray a complicated and often contradictory historical figure. Capable of kindness but relying on casual cruelty as it suits his purposes.  Pugnacious. Insecure. Lonely. Vindictive. Menacing. Smarter than his critics contend and colder and more calculating than his allies believe. A man who embedded himself in popular culture, galvanizing support for a run for high office that he began preliminary spadework for 30 years ago, to ultimately become a president who pushed American democracy to the brink.

The through-line of Trump’s life and his presidency is the enduring question of what is in it for him or what he needs to say to survive short increments of time in the pursuit of his own interests.

Confidence Man is also, inevitably, about the world that produced such a singular character, giving rise to his career and becoming his first stage. It is also about a series of relentlessly transactional relationships. The ones that shaped him most were with girlfriends and wives, with Roy Cohn, with George Steinbrenner, with Mike Tyson and Don King and Roger Stone, with city and state politicians like Robert Morgenthau and Rudy Giuliani, with business partners, with prosecutors, with the media, and with the employees who toiled inside what they commonly called amongst themselves the “Trump Disorganization.”

That world informed the one that Trump tried to recreate while in the White House. All of Trump’s behavior as President had echoes in what came before.  In this revelatory and newsmaking book, Haberman brings together the events of his life into a single mesmerizing work. It is the definitive account of one of the most norms-shattering and consequential eras in American political history.

Maggie Haberman is a journalist who joined The New York Times in 2015 and was part of a team that won a Pulitzer Prize in 2018 for reporting on the investigations into Donald Trump’s, and his advisers’, connections to Russia. She has twice been a member of a team that was a finalist for a Pulitzer Prize, in 2021 for reporting on the Trump administration's response to the coronavirus, and in 2022 for coverage related to the Jan. 6, 2021 riot at the Capitol. Before joining The New York Times as a campaign correspondent, she worked as a political reporter at Politico, from 2010 to 2015. She previously worked at The New York Post and The New York Daily News.

“Confidence Man [is] Maggie Haberman’s much anticipated biography of the president she followed more assiduously than any other journalist. No doubt, there are revelations aplenty here. But this is a book more notable for the quality of its observations about Trump’s character than for its newsbreaks. It will be a primary source about the most vexing president in American history for years to come.” —Joe Klein, The New York Times

"A uniquely illuminating portrait...Haberman’s contribution in Confidence Man [is] much larger than its arresting anecdotes. Later generations of historians will puzzle over Trump’s rise to national power. The best of them will have learned from Haberman’s book that none of it would have been possible but for a social, cultural, political, media and moral breakdown that overtook New York beginning in the 1970s, a fiasco of trusted institutions that, having allowed the Trumpian virus to grow, failed at every step to contain its spread, then profited from, aided and even cheered its devastation."  — Sean Wilentz, The Washington Post

“[A] monumental look at Donald Trump and his presidency . . . it may be first among equals.” — David Shribman, Los Angeles Times

“Haberman, the New York Times’ Trump whisperer, delivers. [Confidence Man] is much more than 600 pages of context, scoop and drama. It is a political epic, tracing Donald Trump’s journey from the streets of Queens to Manhattan’s Upper East Side, from the White House to Mar-a-Lago, his Elba.” —The Guardian

“Haberman deploys a deep sense of Trump's origins and career, including his relationships with New York’s mayors and powerful Democratic ward bosses such as Meade Esposito. Haberman helps us understand how his lifelong desire for stardom pushed him to bid for the presidency and how his unorthodox credentials and tactics enabled him to win. She has a witness’ eye for much that she relates.” —NPR.org

“An origin story plus an inside-the-room blow-by-blow—a book arguably only Haberman could have written. . . . It’s been called the book Trump fears the most—he’s ‘terrified,’ said one former aide—and that’s because Haberman is the reporter who knows him the best.” —Michael Kruse, POLITICO

“Haberman stands out among journalists who have followed Mr. Trump . . . Haberman makes a particular contribution with [Confidence Man] by describing how the annealing interplay of politics and commerce in the New York of the 1970s and 1980s equipped Mr. Trump with the low expectations and cynical convictions that would carry him so far . . . Her devastating portrait of Mr. Trump’s failure should give his imitators pause.” —The Economist

“Maggie Haberman breaks more news than the rest of us.” —Jonathan Swan

“Maggie Haberman gets all the information” — Jimmy Kimmel

“No reporter has lived rent-free in Trump’s head longer than Haberman.” — POLITICO Playbook

“Haberman’s book is chockablock with scoops . . . but what singles it out from the competition is its perceptiveness about Trump’s character and the way his private vices became public menaces.” —Peter Conrad, The Guardian

“With a masterly command of her subject, Haberman carefully weighs her sources and composes a highly readable, believable account of Trump from childhood through his petulant Mar-a-Lago exile.” —Shepherd Express

"The most comprehensive portrait of the 45th president to date, one that correctly diagnoses him as a malignant, world-historical narcissist and that will be read long after he alights from the proverbial couch.” —Air Mail

"A damning portrait of narcissism, megalomania, and abject failure—and the price the country is paying in the bargain." —Kirkus Reviews