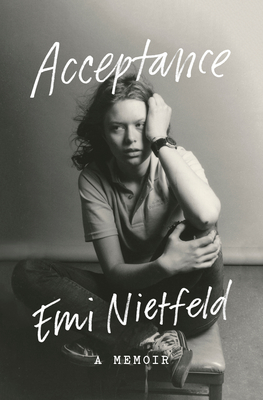 “Nietfeld’s gifts for capturing the fury of living at the mercy of bad circumstances, for critiquing the hero’s journey even while she tells it, make Acceptance a remarkable memoir.” —The New York Times Book Review

A luminous, generation-defining memoir of foster care and homelessness, Harvard and Big Tech, examining society’s fixation with resilience—and its cost

As a homeless teenager writing college essays in her rusty Toyota Corolla, Emi Nietfeld was convinced that the Ivy League was the only escape from her dysfunctional childhood. But upward mobility required crafting the perfect resilience narrative. She had to prove that she was an “overcomer,” made stronger by all that she had endured.

The truth was more complicated. Emi’s mom was a charming hoarder who had her put on antipsychotics but believed in her daughter’s brilliance—unlike the Minnesotan foster family who banned her “pornographic” art history flash cards (of Michelangelo’s David). Emi’s other parent vanished shortly after coming out as trans, a situation few understood in the mid-2000s. Her own past was filled with secrets: mental health struggles, Adderall addiction, and the unbecoming desperation of a teenager fending for herself. And though Emi would go on to graduate from Harvard and become a software engineer at Google, she found that success didn’t necessarily mean safety.

Both a chronicle of the American Dream and an indictment of it, this searing debut exposes the price of trading a troubled past for the promise of a bright future. Told with a ribbon of dark humor, Acceptance challenges our ideas of what it means to overcome—and find contentment on your own terms.

Emi Nietfeld is a writer and software engineer. After graduating from Harvard College in 2015, she worked at Google and Facebook. Her essays have appeared in The New York Times, The Rumpus, Vice, and other publications. She lives in New York City with her family.

“Acceptance is no simple story of transcendence, and instead complicates the narrative of pulling one’s self up by the bootstraps. It is page-turning, raw, and darkly funny.” —BuzzFeed

“A raw, insightful memoir—from childhood neglect to Harvard and Big Tech—tenderly baring the underbelly of what we call ‘success.’” —People

“Acceptance is not a phoenix-rising-from-the-ashes tale. Instead, Nietfeld refuses silver linings and focuses on the toll of contorting oneself into a ‘perfect, deserving’ victim who was ‘hurt in just the right way.’ As such, Acceptance serves as a necessary corrective to what she notes is called ‘the gospel of grit’ in discussions of hardship in America, and an indictment of not just the systems that failed Nietfeld, but of a society that only wants to hear from its most vulnerable when they exhibit post-traumatic growth. . . . It’s a perspective that we can all learn from.” —NPR

“In breaking from the Cinderella-story convention of social mobility memoirs, Acceptance achieves exceptional candor and beauty.” —The Cleveland Review of Books

“A narrative with all the propulsion of a novel . . . Acceptance will draw inevitable comparisons to Jeanette Walls’ The Glass Castle, for good reason. . . . Acceptance is a gripping, urgent memoir in an era when social mobility feels beset from all sides. Nietfeld recasts the myth of resilience as a veil for society’s failure to empower vulnerable individuals. And in her pursuit of healing, she offers the hope that even in our darkest moments, there is a future—and within it, the ability to be fully present.” —The Southern Review of Books

“Nietfeld’s memoir offers an absorbing and clear-eyed view into her dysfunctional childhood—including living with her mother, who was a hoarder; navigating homelessness and foster care; and her own mental health struggles—and how she made her way out (for better or worse) onto the other side to achieve societal ‘success.’” —The Millions’ "Most Anticipated of August"

“[Nietfeld’s] impressive debut is a radical probe into our society’s insistence on resiliency through unthinkable struggles, leading readers to reexamine long-held definitions of success.” —Booklist

“A complex meditation on desperation, leveraging personal pain, and how the drive to achieve can be a gift and a pathology simultaneously. . . . A powerful memoir of overcoming adversity that also effectively interrogates the concept of meritocracy.” —Kirkus (starred review)

“[A] captivating page-turner. . . . She expertly describes the determined mindset with which she tackled seemingly unrealistic goals while also battling almost impossible setbacks; readers will find themselves rooting for Nietfeld. . . . A gripping firsthand account of a teenager navigating homelessness and the foster care system. It should appeal to many and may be of particular interest to school counselors, foster parents, psychologists, social workers, and others who work with children in difficult situations.” —Library Journal

“From the blind spots of the foster care system to the ivied walls of Harvard Yard, Acceptance offers an intimate and eye-opening look at the stark reality that belies the myth of meritocracy and the American Dream. In spare prose, Emi Nietfeld shows that, more than elite credentials and material wealth, transcending adversity comes down to the stories we choose to tell. I couldn't put it down.” —Qian Julie Wang, New York Times bestselling author of Beautiful Country

“Wrenching, page-turning, and alive with dark humor, Acceptance illuminates our society’s obsession with precise forms of vulnerability—racialized, blameless, and impossible for any real child to deliver. Now in the first decade of her adulthood, Emi Nietfeld gives a sharp and ultimately triumphant report on a landscape that few teenagers survive with their voices intact. I read with my heart in my throat.” —Lacy Crawford, author of Notes on a Silencing

“Foster care, psych wards, and antipsychotic medication all fail a heroine who slips through every crack. From the first, we know that Emi Nietfeld eventually finds her way through soul-crushing circumstances. But how? There is rowing, computer code, and the sacraments of Harvard. Then, there’s doing the detective work to confront your demons. Acceptance is an engrossing, affirming story of human resilience, with the pacing of a thriller.” —Sherry Turkle, MIT professor, author of Reclaiming Conversation and The Empathy Diaries: A Memoir

“In a voice marked by both keen insight and emotional force, Nietfeld's Acceptance traces the narrator's hellbent journey up and out of her own origins, revealing in the process both the individual cost of chasing this particular American dream, and the tragic—almost pyrrhic—victory of ‘success.’ A powerful and compelling read.” —Marya Hornbacher, New York Times bestselling author of Madness and Wasted