Thinking Without a Banister: Essays in Understanding, 1953-1975 (Paperback) 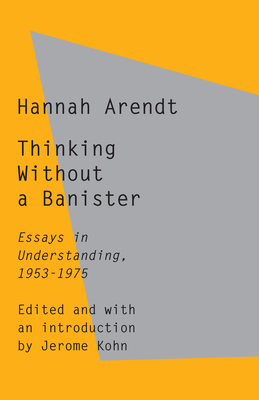 Hannah Arendt was born in Germany in 1906 and lived in America from 1941 until her death in 1975. Thus her life spanned the tumultuous years of the twentieth century, as did her thought. She did not consider herself a philosopher, though she studied and maintained close relationships with two great philosophers—Karl Jaspers and Martin Heidegger—throughout their lives. She was a thinker, in search not of metaphysical truth but of the meaning of appearances and events. She was a questioner rather than an answerer, and she wrote what she thought, principally to encourage others to think for themselves. Fearless of the consequences of thinking, Arendt found courage woven in each and every strand of human freedom.

In 1951 she published The Origins of Totalitarianism, in 1958 The Human Condition, in 1961 Between Past and Future, in 1963 On Revolution and Eichmann in Jerusalem, in 1968 Men in Dark Times, in 1970 On Violence, in 1972 Crises of the Republic, and in 1978, posthumously, The Life of the Mind. Starting at the turn of the twenty-first century, Schocken Books has published a series of collections of Arendt’s unpublished and uncollected writings, of which Thinking Without a Banister is the fifth volume.

The title refers to Arendt’s description of her experience of thinking, an activity she indulged without any of the traditional religious, moral, political, or philosophic pillars of support. The book’s contents are varied: the essays, lectures, reviews, interviews, speeches, and editorials, taken together, manifest the relentless activity of her mind as well as her character, acquainting the reader with the person Arendt was, and who has hardly yet been appreciated or understood.

(Edited and with an introduction by Jerome Kohn)

HANNAH ARENDT was raised in Königsberg, in East Prussia, the city of Immanuel Kant. To Arendt, Lant was the clearest of all the great thinkers; she said she sensed him looking over her shoulder while she wrote. In 1933, as a Jew in Hitler’s Germany, Arendt was briefly arrested—happily not by the Gestapo—for working with the Berlin Zionist organization. She escaped Germany and settled in Paris, where she worked with Youth Aliyah, an organization that enabled Jewish children, mainly from Eastern Europe, to go to Palestine. In Paris she became a friend to Walter Benjamin and married Heinrich Bluecher, who had also fled Germany, for political rather than racial or religious reasons.

After the German invasion of France in May 1940, Arendt was imprisoned in the Gurs Internment Camp as an enemy alien. She escaped when it was possible to do so; those who did not ended up in Auschwitz, shipped there under the direction of Adolf Eichmann. With visas provided by Hiram Bingham and funds from Carian Fry, Arendt and Bluecher traveled from France to Spain to Portugal and from there to New York City in 1941. After eighteen years of statelessness, she became an American citizen in 1951. Arendt taught at Notre Dame, Berkeley, Princeton, and Chicago, and, for the last seven years of her life, at the New School for Social Research. She died suddenly on December 4, 1975, at the age of sixty-nine. None of her books has ever gone out of print.

“Almost every essay in this book contains “pearls” of Arendt’s tonically subversive thinking, and many of her observations push readers to think harder about the language in which political activity is conducted.”—The New York Times Book Review

“This second volume of some 40 essays, interviews, conference presentations, acceptance speeches, letters and reviews, edited and introduced by Arendt scholar Kohn, reveals a wide focus, including the relationship of theory to practice, American elections, the Cold War, freedom, civic responsibility, and happiness….[Arendt] emerges as startlingly prescient: in an interview in 1973, for example, she emphasized that a free press is crucial in a democracy….A challenging, densely argued, provocative collection.” —Kirkus Reviews

“These essays, letters, and other short and complete pieces are cause to celebrate . . . Insightful and plain-spoken . . . Reading some of these essays here and now, the shock of how well they relate to current U.S. political realities may strike a chord with many academic readers but also engage informed general readers as well . . . Highly recommended for academic and larger public libraries.”—Library Journal

“Thinking Without a Banister is an intellectually exhilarating read in its entirety, exploring the intersection of politics and human life from angles as varied as the imagination, war crimes, Emerson’s legacy, the meaning of revolution, and the relationship between private rights and public good.”—Brain Pickings

“The texts brought together here offer a sound introduction to key ideas in Arendt’s writing, while adding nuance to her already published work for more familiar readers. Kohn’s sharp footnotes provide valuable contextual and biographical information, and should be read by anyone interested in Arendt’s life and writing. The incisive framing of the volume draws Arendt into our contemporary political moment . . . Sobering . . . Here, Arendt’s works on freedom, politics, culture, revolution, thinking, and judgment are brought together to highlight her desire to revive political freedom and public happiness in a world endlessly defined by wars, revolutions, and violence.”—Los Angeles Review of Books

“Erudite . . . The collection gives rare insights into Arendt’s personal opinions and reflections on her own work. This collection contains a variety that will be illuminating and fascinating for both Arendt novices and experts.”—Publishers Weekly

“Thinking Without a Banister provides readers with an opportunity to trace the post-Origins development of Arendt’s thought in a single volume. The essays and lectures it collects—many of them available to the general public for the first time—provide an accessible point of entry into nearly every aspect of Arendt’s political theory.”—Commonweal Magazine

“Thinking Without a Bannister, her collected essays, is an assemblage of Arendt at her most pressing and brilliant. She’s simply—you know what, if you haven’t read Hannah Arendt, just go and get this book. You’ll thank me for it.”—Read It Forward