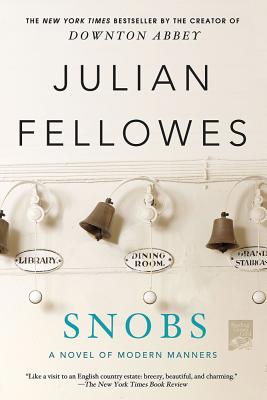 From the creator of the Emmy Award-winning Downton Abbey...

"The English, of all classes as it happens, are addicted to exclusivity. Leave three Englishmen in a room and they will invent a rule that prevents a fourth joining them."

The best comedies of manners are often deceptively simple, seamlessly blending social critique with character and story. In his superbly observed first novel, Julian Fellowes, creator of the Masterpiece sensation Downton Abbey and winner of an Academy Award for his original screenplay of Gosford Park, brings us an insider's look at a contemporary England that is still not as classless as is popularly supposed.

Edith Lavery, an English blonde with large eyes and nice manners, is the daughter of a moderately successful accountant and his social-climbing wife. While visiting his parents' stately home as a paying guest, Edith meets Charles, the Earl Broughton, and heir to the Marquess of Uckfield, who runs the family estates in East Sussex and Norfolk. To the gossip columns he is one of the most eligible young aristocrats around.

When he proposes. Edith accepts. But is she really in love with Charles? Or with his title, his position, and all that goes with it?

One inescapable part of life at Broughton Hall is Charles's mother, the shrewd Lady Uckfield, known to her friends as "Googie" and described by the narrator---an actor who moves comfortably among the upper classes while chronicling their foibles---"as the most socially expert individual I have ever known at all well. She combined a watchmaker's eye for detail with a madam's knowledge of the world." Lady Uckfield is convinced that Edith is more interested in becoming a countess than in being a good wife to her son. And when a television company, complete with a gorgeous leading man, descends on Broughton Hall to film a period drama, "Googie's" worst fears seem fully justified.

In Snobs, a wickedly astute portrait of the intersecting worlds of aristocrats and actors, Julian Fellowes establishes himself as an irresistible storyteller and a deliciously witty chronicler of modern manners.

Julian Fellowes is the Emmy Award-winning writer and creator of Downton Abbey and the winner of the 2001 Academy Award for Best Original Screenplay for Gosford Park. He also wrote the screenplays for Vanity Fair and The Young Victoria. He is the bestselling author of Snobs and Past Imperfect. His other works include The Curious Adventure of the Abandoned Toys and the book for the Disney stage musical of Mary Poppins.

As an actor, his roles include Lord Kilwillie in the BBC Television series Monarch of Glen and the 2nd Duke of Richmond in Aristocrats, as well as appearances in the films Shadowlands, Damage, and Tomorrow Never Dies.

He lives in London and Dorset, England.

“Like a visit of an English country estate: breezy, beautiful, and charming.” —The New York Times Book Review

“[A] guilty pleasure of a novel [that] seems authentic down to the wallpaper and the Wellingtons. Hilarious…sharp, entertaining, and unforgiving.” —Anna Quindlen

“I couldn't put Snobs down: Who could resist a great story of a beautiful, ambitious girl on her climb to the turreted top of the castle-hopping set? As witty as he is smart, Julian Fellowes is the Oscar-winning, Oscar Wilde of the minute.” —Plum Sykes

“Julian Fellowes's witty, wise depiction of the lives and lunacies of upper-class English life is just my cup of tea....” —Jane Stanton Hitchcock

“Snobs is everything you would hope for from the writer of Gosford Park. A delicious thoroughbred delight, a guilty treat that is awake to every maddening and appallingly attractive nuance of English social life. The novel somehow contrives to be moral without being preachy or losing for a minute its gracefully shameless delight in the well bred and their satellites. A kind of Louis Auchincloss for our times, Julian Fellowes has written a book that is destined to grace all the bedside tables of all the better houses in the land.” —Stephen Fry

“This is the kind of book Edith Wharton would have written if she were around today.” —Arnold Scaasi

“Snobs is an insightful, funny satire of English upper-crust country life in the tradition of Mitford or Waugh....The best chick-lit book of the season was written by a man.” —The Globe and Mail

“Sparklingly rompish...As long as this world does still exist, Fellowes is a delectable guide to its absurdities.” —Sunday Times (London)

“Illustrated with some cherishably nasty, Gosford Park--style scenes of aristocratic point-scoring, and far more illuminating than a copy of Correct Form...one of those books one imagines being sent up to Balmoral...where it will be proclaimed divinely funny and quite amazingly true to life.” —The Guardian

“A delicious comedy of manners on the nuances of English social life, which raises laughter and an occasional wince of recognition.” —Daily Mail

“Provocative, titillating, and seductive...Julian Fellowes tells this anachronistic morality tale with such wit, verve, elegance, and schadenfreude that it never loses momentum.” —The Spectator

“Fellowes doesn't try to hide his love of the funny, sealed, above-stairs world of dukes, duchesses, marquesses, nusery maids, herbaceous borders, and breakfast kedgeree under its own silver lid, all of which is what makes Snobs such a good, fresh read.” —Telegraph