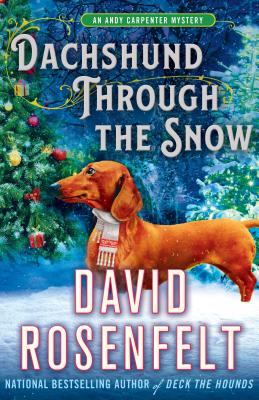 By David Rosenfelt
$24.99
Email or call for price.

This is book number 20 in the An Andy Carpenter Novel series.

This Christmas, lawyer Andy Carpenter and his golden retriever, Tara, can't say no to helping young Danny and his dachshund, Murphy.

Lawyer Andy Carpenter and his wife, Laurie, have started a new Christmas tradition. Their local pet store has a Christmas tree, where instead of ornaments there are wishes from those in need. One poignant wish leads Andy to a child named Danny, whose selfless plea strikes a chord. Danny asked Santa for a coat for his mother, a sweater for his dachshund, Murphy, and for the safe return of his missing father.

It turns out Danny’s father doesn't want to be found, he’s on the run after just being arrested for a murder that took place fourteen years ago – a murder that Danny’s mother swears he didn’t commit.

With his trademark humor and larger-than-life characters – including a police officer and his K-9 partner, Simon – Rosenfelt never fails to deliver as Andy and his eccentric crew dash to reunite a family in time for Christmas.

DAVID ROSENFELT is the Edgar-nominated and Shamus Award-winning author of more than twenty Andy Carpenter novels, including One Dog Night, Collared, and Deck the Hounds; its spinoff series, The K-Team; the Doug Brock thriller series, which starts with Fade to Black; and stand-alone thrillers including Heart of a Killer and On Borrowed Time. Rosenfelt and his wife live in Maine with an ever-changing pack of rescue dogs. Their epic cross-country move with 25 of these dogs, culminating in the creation of the Tara Foundation, is chronicled in Dogtripping.

“The main course can't top the opening act because the dog is the consistently amusing hero's most appealing client ever.” — Kirkus Reviews

"It's a pleasure to read a mystery where every sentence, even every word, advances the plot or comments on it." — Booklist

“This book was a romping good time, perfect for taking a break through the stressful holidays . . . The action and the fun never stop, and I enjoyed reading it very much . . . David Rosenfelt gets two paws up and a tail wag from me.” — Dogster Magazine

“If you love dogs (and even if you don’t but love a good mystery), you owe it to yourself to pick up a copy of David Rosenfelt’s Andy Carpenter mystery series . . . Talk about hitting all the right buttons. Intelligent mystery, dialogue, twists, red-herrings, and dogs.” — Rosepoint Publishing

“This is a fun, feel-good story that also has depth and complexity . . . Andy’s humor and the overall tone make this a light read, but beneath the surface we’re given much to consider.” — Quiet Fury Books

“Andy’s team has been unstoppable in this series, and this book is no exception. Andy’s relationship with each and every one of them is my favorite part of the series, and reading Rosenfelt's books is as comfortable as slippers and hot chocolate.” — Madderly Review

“Dachshund Through the Snow is one of the best in the series. A couple of authentic laughs, a lot of smiles, some warm fuzzies. a very clever mystery, and some good quality time with old friends—it’s a genuinely good time.” — The Irresponsible Reader

“In my recollection, there has never been a bad book featuring Andy Carpenter and his assorted team of assistants.” — Book Bitch