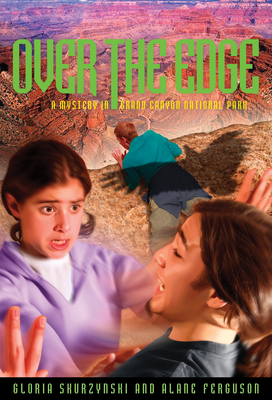 This is book number 7 in the Mysteries in Our National Park series.

When Dr. Olivia Landon receives this anonymous e-mail shortly after broadcasting her controversial plan to save the condors, everyone thinks it’s a crank threat except Dr. Landon’s daughter Ashley. She’s sure it’s the handiwork of Morgan Rogers, self-proclaimed anarchist and computer geek. Suspicions mount when the death threat almost becomes a reality, and Morgan is the only witness. Is he innocent or guilty? Journey into the maze of Morgan’s cyberworld and find out!

Alane Ferguson is an award-winning writer. Her first mystery, Show Me the Evidence, won the Edgar Award, given by the Mystery Writers of America. She lives in Elizabeth, CO. Award-winning author Gloria Skurzynski has written more than 30 children’s books. Her non-fiction book, Almost the Real Thing, won the American Institute of Physics Science Writing Award. She has written several non-fiction books for National Geographic including Are We Alone?, an NSTA Outstanding Science Trade Book for Young People and an IRA/CBC Young Adults’ Choice for 2006 . She lives in Boise, ID.

"If your vacation plans include a trip to a national park this summer, you might want to check out some of the books in a...series called ‘Mysteries in Our National Parks.’ Each story takes place in a different park, but you’ll get more than a travel guide. There’s plenty of excitement, too." —Washington Post Kids Post