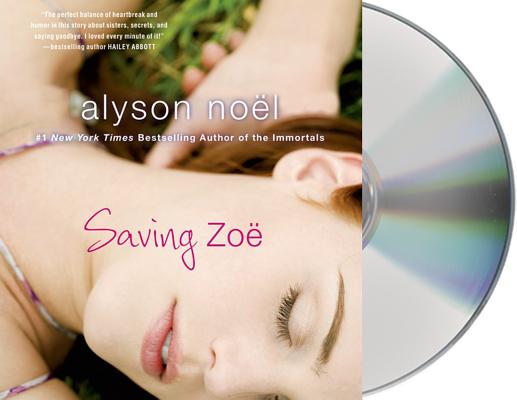 SOON TO BE A MAJOR MOTION PICTURE!

It's been one year since the brutal murder of her older sister, Zoë, and fifteen-year-old Echo is still reeling from the aftermath. Her parents are numb, her friends are moving on, and the awkward start to her freshman year proves she'll never live up to her sister's memory. Until Zoë's former boyfriend Marc shows up with Zoë's diary.

At first Echo's not interested, doubting there's anything in there she doesn't already know. But when curiosity prevails, she starts reading, becoming so immersed in her sister's secret world, their lives begin to blur, forcing Echo to uncover the truth behind Zoë's life so that she can start to rebuild her own.

Prepare to laugh your heart out and cry your eyes out in this highly addictive tale as Alyson Noël's Saving Zoë tackles the complicated relationship between two sisters and shows how the bond can endure long after one of them is gone.

Alyson Noël is the #1 New York Times bestselling, award-winning author of Faking 19, Art Geeks and Prom Queens, Laguna Cove, Fly Me to the Moon, Kiss & Blog, Saving Zoë, Cruel Summer, and the Immortals series including Evermore, Blue Moon, Shadowland, Dark Flame, and Night Star, as well as the Immortals spin-off series beginning with Radiance. With over 2 million copies in print in the US alone, her books have been published in 35 countries and have won awards including the National Reader's Choice Award, NYLA Book of Winter Award, NYPL Stuff for the Teenage, TeenReads Best Books of 2007, and Reviewer's Choice 2007 Top Ten, and have been chosen for the CBS Early Show's "Give the Gift of Reading" segment, and selected for Seventeen Magazine's "Hot List" and Beach Book Club Pick. She lives in Laguna Beach, California.

Katie Schorr's audiobook credits include narrating the novels in Alyson Noel's bestselling Immortals series – Evermore, Blue Moon, Shadowland, and Dark Flame.  Of her work on the series, AudioFile magazine has said, "Narrator Katie Schorr has a wonderfully raspy, youthful voice, which she puts to good effect on the cast of teenaged characters."Schorr’s one-woman show, Take Me. Seriously., ran for six months at The Upright Citizens Brigade Theater, and she performs throughout New York in new works at The Ensemble Studio Theater and Ars Nova, among other theaters.  She has appeared on VH1's Best Week Ever and co-stars in the web series Head in the Oven with Saturday Night Live actor Bill Hader. She is the co-creator of Yoga Partners: A Web Series.

“Alyson Noël finds the perfect balance of heartbreak and humor in this story about sisters, secrets and saying goodbye. I loved every minute of it!” —Hailey Abbott, author of the New York Times bestselling Summer Boys series

“Even though you know from page one where the story will eventually lead, Saving Zoë pulls off the amazing trick of keeping you guessing. You have to follow along with Echo, the good sister chasing the tail of the 'bad' one through the streets of darkest suburbia. Prepare to read this in one long sitting. Think Chinatown. Think 'Where are you going, where have you been?' Think Veronica Mars.” —Maureen Johnson, author of Devilish

“Noel writes a smart and compelling story about life, love and loss that you won't be able to put down. Saving Zoeis a must-read.” —Cara Lockwood, author of Wuthering High