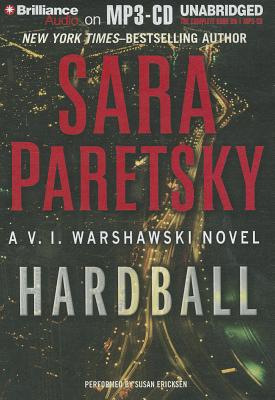 By Sara Paretsky, Susan Ericksen (Performed by)
Email books@fearrington.com or call for price (919) 542-3030
Hard to Find

Chicago's unique brand of ball is sixteen-inch slow pitch, played in leagues all over the city for more than a century. But in politics, in business, and in law enforcement, the game is hardball. When V. I. Warshawski is asked to find Lamont Gadsden, a man who's been missing for four decades, a search that she figured would be futile turns lethal. Old skeletons from the city's racially charged history, as well as haunting family secrets -- her own and those of the elderly sisters who hired her -- rise up to brush her back from the plate with a vengeance. To complicate matters, Petra, a young cousin whom V.I. has never met, arrives from Kansas City to work on a political campaign. It does not take long for the high-spirited yet likable Petra to win over V.I.'s affections. When Petra goes missing after a break-in at the office, V.I. is determined to find her beloved cousin. As the search to locate Petra becomes more desperate, V.I. is also having difficulties tracking down Lamont Gadsden. Unable to catch a break, she learns that a nun who marched with Martin Luther King, Jr., has died before she can reveal crucial evidence. V.I. herself almost dies in a blazing fire, and new information has emerged about her father's role in a politically and racially charged trial almost forty years ago. Afraid to discover that her adored father might have been a bent cop, V.I. takes the investigation all the way to its frightening end.