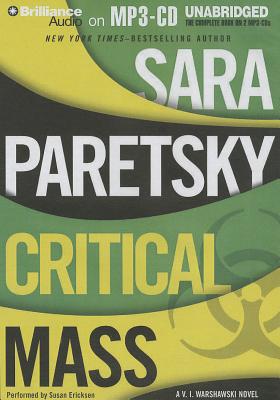 The brilliant V. I. Warshawski returns in another hard-hitting entry, combining razor-sharp plotting and compelling characters with a heady mix of timely political and social themes. "Both Paretsky and the sharp-tongued justice-seeker, V. I. Warshawski, remain formidable. . . . V. I. reigns as crime fiction's spiky, headstrong warrior woman of conscience, and Paretsky, classy champion of the powerless, has never been more imaginative, rueful, transfixing, and righteous." -- BOOKLIST (starred review) V. I. Warshawski's closest friend in Chicago is the Viennese-born doctor Lotty Herschel, who lost most of her family in the Holocaust. Lotty escaped to London in 1939 on the Kindertransport with a childhood playmate, Kitty Saginor Binder. When Kitty's daughter finds her life is in danger, she calls Lotty, who in turn summons V. I. to help. The daughter's troubles turn out to be just the tip of an iceberg of lies, secrets, and silence, whose origins go back to the mad competition among America, Germany, Japan, and England to develop the first atomic bomb. The secrets are old, but the people who continue to guard them today will not let go without a fight.