Tales from the Shadowhunter Academy (Hardcover) 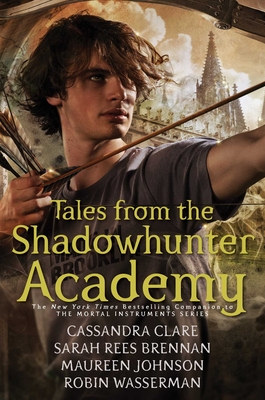 The New York Times and USA TODAY bestselling collection of short stories chronicling the adventures of Simon Lewis as he trains to become a Shadowhunter is now available in print for the first time with ten brand-new comic illustrations!

Simon Lewis has been a human and a vampire, and now he is becoming a Shadowhunter. The events of City of Heavenly Fire left him stripped of his memories, and Simon isn’t sure who he is anymore. So when the Shadowhunter Academy reopens, Simon throws himself into this new world of demon-hunting, determined to find himself again. Whomever this new Simon might be.

But the Academy is a Shadowhunter institution, which means it has some problems. Like the fact that non-Shadowhunter students have to live in the basement. At least Simon’s trained in weaponry—even if it’s only from hours of playing D&D.

Join Simon on his journey to become a Shadowhunter, and learn about the Academy’s illustrious history along the way, through guest lecturers such as Jace Herondale, Tessa Gray, and Magnus Bane. Written by Cassandra Clare, Sarah Rees Brennan, Maureen Johnson, and Robin Wasserman, these moving and hilarious short stories are perfect for the fan who just can’t get enough of the Shadowhunters.

Cassandra Clare is the author of the #1 New York Times, USA TODAY, Wall Street Journal, and Publishers Weekly bestselling Shadowhunter Chronicles. She is also the coauthor of the bestselling fantasy series Magisterium with Holly Black. The Shadowhunter Chronicles have been adapted as both a major motion picture and a television series. Her books have more than fifty million copies in print worldwide and have been translated into more than thirty-five languages. Cassandra lives in western Massachusetts with her husband and three fearsome cats. Visit her at CassandraClare.com. Learn more about the world of the Shadowhunters at Shadowhunters.com.

Sarah Rees Brennan is the New York Times bestselling author of the critically acclaimed Unspoken and The Demon’s Lexicon trilogy. Her most recent book, In Other Lands, was a Hugo Award finalist. She lives in Ireland. Visit her at SarahReesBrennan.com.

Robin Wasserman is the author of Girls on Fire, an NPR and BuzzFeed Best Book of the Year. She is a graduate of Harvard College with a Master’s in the history of science. She lives in Los Angeles, where she writes for television.

A great read for fantasy fans who want to be completely immersed in a different world.
— Booklist