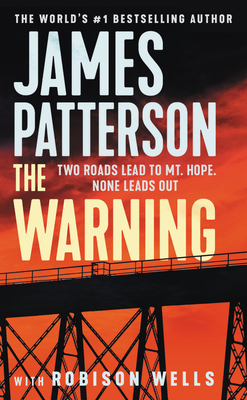 In this fast-paced thriller, a power plant explosion takes a small-town community off the grid -- all while a terrifying force lurks in the shadows.
Two roads lead to Mount Hope. None leads out.
A small southern town was evacuated after a freak accident. As the first anniversary of the mishap approaches, some residents are allowed to return past the national guard roadblocks.
Mount Hope natives Maggie and Jordan quickly discover that their hometown is not as it was before. Downed cellular networks fail to resume service. Animals savagely attack humans. And the damaged power plant, where Jordan's father is an engineer, is under military lockdown.
As friends and family morph into terrifying strangers, Maggie and Jordan increasingly turn to each other. Their determination to discover who -- or what -- has taken control of Mount Hope soon has them caught in the crosshairs of a presence more sinister than any they could have imagined.

James Patterson is the world's bestselling author and most trusted storyteller. He has created many enduring fictional characters and series, including Alex Cross, the Women's Murder Club, Michael Bennett, Maximum Ride, Middle School, and I Funny. Among his notable literary collaborations are The President Is Missing, with President Bill Clinton, and the Max Einstein series, produced in partnership with the Albert Einstein Estate. Patterson's writing career is characterized by a single mission: to prove that there is no such thing as a person who "doesn't like to read," only people who haven't found the right book. He's given over three million books to schoolkids and the military, donated more than seventy million dollars to support education, and endowed over five thousand college scholarships for teachers. The National Book Foundation recently presented Patterson with the Literarian Award for Outstanding Service to the American Literary Community, and he is also the recipient of an Edgar Award and six Emmy Awards. He lives in Florida with his family.