A Year in the Merde (Hardcover) 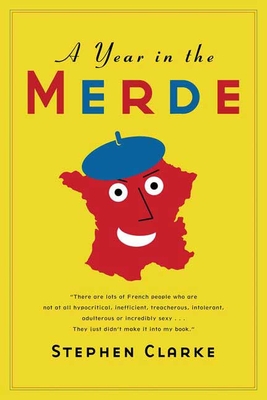 I don’t care what you think of the French. Read this book for your own personal well-being.

Feel the muscles in your face tighten as you chuckle at least once every page. Every so often a belly laugh with friends and family asking if you’re okay. Wipe away the tears and nod before snorting again at some pithy saying that strikes your fancy.

Finally something the French are good at besides food and wine. Laughter, the best medecine.

An urban antidote to A Year in Provence, Stephen Clarke's book is a laugh-out-loud account of a year in the life of an expat in Paris-for Francophiles and Francophobes alike.

A Year in the Merde is the almost-true account of the author's adventures as an expat in Paris. Based on his own experiences and with names changed to avoid embarrassment, possible legal action-and to prevent the author's legs being broken by someone in a Yves Saint Laurent suit, the book is narrated by Paul West, a twenty-seven-year-old Brit who is brought to Paris by a French company to open a chain of British tea rooms. He must manage of a group of lazy, grumbling French employees, maneuver around a treacherous Parisian boss, while lucking into a succession of lusty girlfriends (one of whom happens to be the boss's morally challenged daughter). He soon becomes immersed in the contradictions of French culture: the French are not all cheese-eating surrender monkeys, though they do eat a lot of smelly cheese, and they are still in shock at being stupid enough to sell Louisiana, thus losing the chance to make French the global language. The book will also tell you how to get the best out of the grumpiest Parisian waiter, how to survive a French business meeting, and how not to buy a house in the French countryside. The author originally wrote A Year in the Merde just for fun and self-published it in France in an English-language edition. Weeks later, it had become a word-of-mouth hit for expats and the French alike. With translation rights now sold in eleven countries and already a bestseller in the UK and France, Stephen Clarke is clearly a Bill Bryson (or a Peter Mayle...) for a whole new generation of readers who can never quite decide whether they love-or love to hate-the French.

Stephen Clarke is a British writer working for a French press group in Paris. He has previously written comedy for BBC Radio. He is currently working on the next volume of Paul West's adventures.

"The antidote to Peter Mayle, this 'almost-true memoir' will appeal equally to Francophobes and Francophiles."

"Call him the anti-Mayle. Stephen Clarke is acerbic, insulting, un-PC and mostly hilarious."

"Highly entertaining … Clarke renders the flavor of life in Paris impeccably…[his] eye for detail is terrific."

"Combines the gaffes of Bridget Jones with the boldness of James Bond."

"Clarke does for Paris what Peter Mayle did for Provence…Highly recommended."