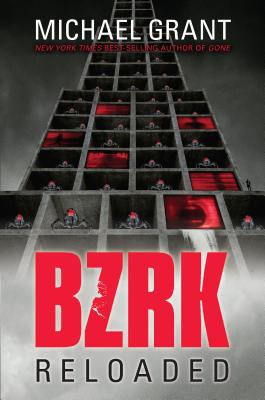 This is book number 2 in the Bzrk series.

From best-selling author Michael Grant comes the highly anticipated, terrifying, and mind-bending second book in the BZRK trilogy. The entire BZRK cell--including Noah and Sadie--has been left in pieces after the last round of battle with the Armstrong Twins, conjoined brothers who plot to rob mankind of its free will. Vincent's mind is shattered, and his memories hold dangerous secrets--secrets that Lear, BZRK's mysterious leader, will stop at nothing to protect.

Meanwhile, Bug Man has taken control of the President's brain, but playing with sanity is a dangerous game. The consequences can spiral way out of control, and the Armstrong Twins are not people Bug Man can afford to disappoint. The nano is as terrifying, exhilarating, and unpredictable as ever. But the wall of secrets that surrounds it is cracking. What will it reveal? And once the dust has settled, who will be sane enough to find out?

"With simmering pots of sexual tension, near-nonstop action, and the threat of howling madness or brain-melting doom around every corpuscular corner, Grant’s new series is off to a breathless, bombastic start." - Booklist, Starred Review

“YA fiction at it’s best. … It's a combination science fiction/adventure/thriller all written brilliantly to entice the reader into a terrifying world.” –Examiner.com

“Squeamish as I am, Grant has me hooked with the compelling characters that populate the Go BZRK storyworld.” –Michael Anderson, WIRED magazine

“Grant utilizes contemporary themes and memorable characters, along with the possibilities of emerging technology to craft aningenious world not too far removed from our own. … The intelligent presentation will likely appeal to a broad audience.” –PopCultureGuy

“If you are anything like me then BZRK will blow your mind. … BZRK is very different from pretty much any YA book out there at the moment, and the closest I can come to expressing how it is continuing to play on my mind almost two weeks later, is to liken it to William Gibson's Neuromancer which had a similar effect on me many years ago. BZRK is a gamechanger for YA literature.” –The Book Zone

“This novel is full of the intricacies of the human body and non-stop action on all fronts. … An intricately written science fiction thriller, BZRK offers an in-depthlook into a war raging deep within the human body.” –Deseret News

Praise for Gone, by Michael Grant:

An ALA Popular Paperback for Young Adults

"This intense, marvelously plotted, paced, and characterized story will immediately garner comparisons to Lord of the Flies...A potent mix of action and thoughtfulness-centered around good and evil, courage and cowardice-renders this a tour-de-force that will leave readers dazed, disturbed, and utterly breathless." - Booklist

"If Stephen King had written LORD OF THE FLIES, it might have been a little like this...Excited to see where [Grant] will take [the reader] with this new series." - Voya