Too Many Times: How to End Gun Violence in a Divided America (Paperback) 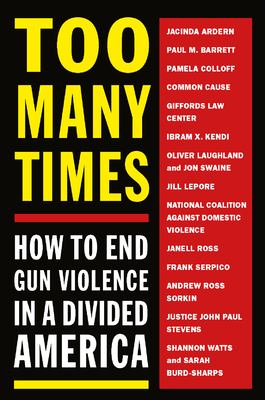 A complete guide to the origins and everyday experience of gun violence in America—and a series of solutions to put a stop to its destruction once and for all.

Gun violence is a problem with many faces, but seemingly no solution. From mass shootings to deadly domestic abuse to police officers opening fire, it permeates American life. And yet it feels impossible to address. The lines are firmly drawn and the federal government has not passed any legislation to reduce gun ownership in over twenty-five years.

Too many lives are lost by gun fire--around 15,000 a year--but we do have the tools to address this crisis. Top journalists, organizations, and anti-gun-violence advocacy groups are represented here--from Pamela Coloff to Ibram X. Kendi to Everytown for Gun Safety and the Giffords Organization--to collect the most comprehensive, thoughtful and practical guide on gun violence in America. There are no deadlocks and no excuses--we have the tools to stop gun violence now.

Jacinda Ardern is the prime minister of New Zealand.
Sarah Burd-Sharps is Director of Research at Everytown for Gun Safety.
Paul M. Barrett is the author of New York Times best-seller GLOCK: THE RISE OF AMERICA'S GUN.
Pamela Colloff is a senior reporter at ProPublica and a staff writer at The New York Times Magazine.
Rachel Graber is Director of Public Policy at the National Coalition Against Domestic Violence.
Ibram X. Kendi is the author of Nationl Book Award-winning STAMPED FROM THE BEGINNING and New York Times best-seller HOW TO BE AN ANTIRACIST.
Oliver Laughland is the Guardian's US southern bureau chief.
Jill Lepore is a staff writer at the New Yorker and the best-selling author of THESE TRUTHS and THE SECRET HISTORY OF WONDER WOMAN.
Janell Ross is a reporter who covers race and politics for the Washington Post, NBC News, and the Huffington Post
Frank Serpico is a former New York City Police Department detective whose whistleblowing prompted the creation of the Knapp Commission in 1970.
Andrew Ross Sorkin is The New York Times's chief mergers and acquisitions reporter and the author of New York Times best-seller TOO BIG TO FAIL.
Justice John Paul Stevens served as Associate Justice of the United States Supreme Court from 1975 until 2010.
Jon Swaine is an investigative reporter at the Washington Post. He previously was a senior reporter at the GuardianUS.
Robyn Thomas is Executive Director of the Giffords Law Center.
Shannon Watts is the founder of Mom's Demand Action and author of FIGHT LIKE A MOTHER.

"Powerful ammunition, so to speak, for advocates of gun control in a time of uncontrolled violence."—Kirkus Reviews