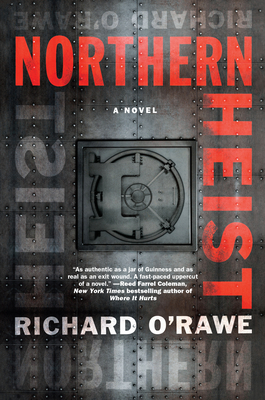 "Full of double and triple-crosses  . . . Northern Heist’s deeds and details seem as real as a smashed kneecap, while its stopwatch tension, heightened by present-tense voice, is reminiscent of such classic caper films as 'Rififi' and 'The Asphalt Jungle."—The Wall Street Journal

A fast-paced, suspenseful thriller based on one of the biggest (and still unsolved) bank-robberies in history, written by a former IRA bank robber.

Nobody robs banks in Belfast without the IRA getting a cut -- not even former Provo James 'Ructions' O'Hare. But when word gets around O'Hare may be up to something, the pressure from the IRA begins.

Ructions' trusts his crack squad of former paramilitary compadres, and has full confidence in his audacious plan: To literally empty the biggest bank in Belfast by kidnapping the families of two employees - known as a "tiger" kidnapping -- in order to force them to help Ructions and his crew get into the bank's vault.

But keeping the plan -- and the money -- from the IRA is another plan entirely, one requiring all Ruction's cunning and skill.

In this stunning debut novel, as audacious and well-executed as Ructions' plan to rob the National Bank itself, Richard O'Rawe -- a former IRA bank robber himself - unleashes a story that will shock, surprise and thrill as he takes you on a white-knuckle ride through Belfast's criminal underbelly. Enter the deadly world of tiger kidnappings, kangaroo courts, money laundering, drug deals and double-crosses.

Richard O'Rawe is a former IRA operative who was imprisoned in the Long Kesh penitentiary during the 1981 hunger strike by prisoners, which resulted in the death of ten prisoners. O'Rawe was the IRA's press officer for the prisoners. He would later go on to write a bestselling book about the experience, Blanketmen: An Untold Story of the H-Block Hunger Strike, as well as several other books inspired by his experiences in the IRA. Northern Heist is his first novel, and first in the "Ructions O'Hare" series, followed most recently by Goering's Gold.

”As authentic as a jar of Guinness and as real as an exit wound. A fast-paced, uppercut of a novel.” — Reed Farrel Coleman, New York Times bestselling author of Where It Hurts

”Full of double- and triple-crosses… ’Northern Heist’s’ deeds and details seem as real as a smashed kneecap, while its stopwatch tension, heightened by present-tense voice, is reminiscent of such classic caper films as ’Rififi’ and ’The Asphalt Jungle’.” —The Wall Street Journal

”O’Rawe channels both Elmore Leonard and Guy Ritchie in this heist thriller full of sharp twists and gritty dialogue, emerging with a style all his own. His reimagining of the real-life bank heist feels so authentic readers will hope he has a strong alibi. Ken Bruen fans won’t want to miss this one.” —PW starred review

“Gripping … A hugely impressive and skillfully crafted debut novel … Its dialogue is sharp and venomous … O’Rawe’s confidence as a storyteller takes off as the heist begins, dropping you in all kinds of damned places.”  — The Irish times

“A real page-turner with a polish unusual in a debut.”  — The Belfast Telegraph