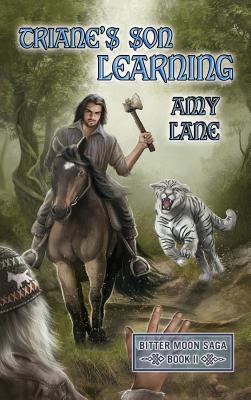 This is book number 2 in the Bitter Moon Saga series.

When Torrant Shadow fled his homeland of Clough, he hoped to leave its threats behind. He spent four years living with the Moons, making sure Yarri had a home; now it's time for Torrant and his foster brother, Aldam, to leave for the University of Triannon, where Torrant hopes to create a new life enmeshed in healing arts and politics.

Torrant's new school friends Trieste and Aylan want to teach him about love as he settles in, and at first, Trieste's tenderness seems to make him the logical choice for an interim lover, while Torrant waits for Yarri to grow up. But Torrant has learned the hard way that nothing is simple when Clough still wields its influence over their lives. More and more, Torrant must call on the cold predator in himself, the part that Aylan most admires. The truth is, Torrant has certain gifts that give him an advantage of self-defense, but using them to protect the ones he cares for may destroy the part of him Trieste and Yarri love best.

As the four schoolmates progress to life beyond education and the evil from Torrant's homeland becomes too pernicious to be ignored, Torrant must choose his destiny: Will he be a healer or a hero? Only Triane's Son can be both.