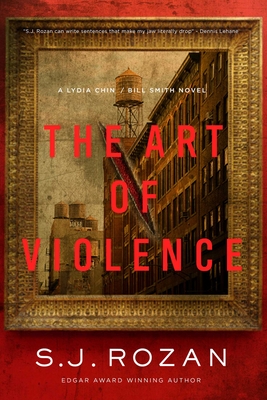 Former client Sam Tabor, just out of Greenhaven after a five-year homicide stint, comes to Bill Smith with a strange request. A colossally talented painter whose parole was orchestrated by art world movers and shakers, Sam's convinced that since he's been out he's killed two women. He doesn't remember the killings but he wants Smith, one of the few people he trusts, to investigate and prove him either innocent or guilty.

NYPD detective Angela Grimaldi thinks Sam's "a weirdo." Smith has no argument with that: diagnosed with a number of mental disorders over the years, Sam self-medicates with alcohol, loses focus (except when he's painting), and has few friends. But Smith doesn't think that adds up to serial killer. He enlists Lydia Chin to help prove it.

Smith and Chin delve into the world surrounding Sam Tabor, including his brother, two NYPD detectives, and various other artists, dealers, collectors, curators, and art connoisseurs. No answers appear. Evidence is found and lost again. And more bodies turn up.

Sam Tabor might be just a crazy artist. But someone is killing people in his orbit. If not Sam, who? Why? And who will be next?

S. J. Rozan is the author of Paper Son and many other crime novels. She has won multiple awards for her fiction, including the Edgar, Shamus, Anthony, Nero, and Macavity, the Japanese Maltese Falcon, and the Private Eye Writers of America Lifetime Achievement Award. S. J. was born and raised in the Bronx and now lives in lower Manhattan.

"As always, Rozan’s intelligent, witty prose is a treat . . . Newcomers as well as devotees will be enthralled."
— Publishers Weekly (starred)

"In addition to her formidable writing skills, Rozan’s own endeavors as an architect of 20 years undoubtedly contribute to the novel's excellent structure."
— Booklist (starred)

"A rewardingly savvy tour of Manhattan’s demented art scene with maybe one climax too many."
— Kirkus Reviews

"The Art of Violence is the latest in S.J. Rozan’s excellent series featuring PI Bill Smith and his partner, Lydia Chin."
— BookPage

“Outstanding. Lydia and Bill were last seen in 2011's Ghost Hero, but Rozan's intricate plotting and affinity for characterization is seamless, making the reader remember how much we missed spending time with these private detectives. Rozan uses the historical footnote of Chinese grocers as a springboard for a rich, deeply satisfying mystery.”
— Oline Cogdill

“Rozan elegantly weaves the web of old secrets, the complexities of race, family loyalties and family history, ancient tangled roots that can turn out to have deadly consequences generations later, into a dazzling narrative. Paper Son is as compelling as it is entertaining. This is the triumphant return of a consummate pro.”
— Open Letters Review [praise for PAPER SON]

“Stellar. As usual, Rozan is adept at devising a plausible but intricate mystery for her leads. She also presents a nuanced look at the experiences of Chinese immigrants in the U.S. Her superior prose and characterizations will make even newcomers hope for a shorter wait for the next book in the series.”
— Publishers Weekly (starred) [praise for PAPER SON]

“Blood and the blues are cooking down on the Delta in the triumphant return of Lydia Chin and Bill Smith. Rozan’s Paper Son is crawfish pie full of surprises served up by this master of the PI genre.”
— Reed Farrel Coleman, New York Times bestselling author of What You Break [praise for PAPER SON]

“Once again, S. J. Rozan proves why she is the consummate pro. Not only is Paper Son one hell of a detective book, the story also takes on a hidden gem of Southern culture—Chinese history in the Mississippi Delta. Rozan continues to entertain with this wonderful series by taking us deep into the most unexpected and fascinating worlds. I have no doubt she’s walked these Mississippi backroads.”
— Ace Atkins, New York Times bestselling author of The Sinners and Robert B. Parker’s Old Black Magic [praise for PAPER SON]