Where the Sun Rises (From Kona With Love #2) (Paperback) 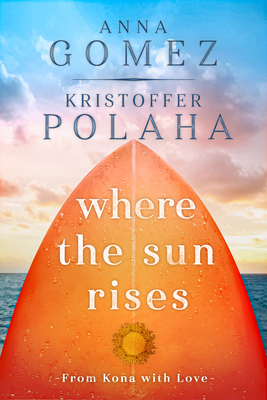 The From Kona with Love series depicts multicultural romance, love, loss, and redemption woven into a family saga, set in the beautiful islands of Hawaii. Though interconnected, each installment can be read as a standalone.

When Maele Moana is paired up with Adam Yates to walk down the aisle together at her friend Andie’s wedding, it isn’t exactly a perfect match. Maele is the daughter of a plantation worker, and Adam is the son of one of the richest men in Oahu.

Their worlds couldn’t be more different. But they have one thing in common.

Dreams that will take Maele back to Kauai while Adam pursues an incredible opportunity in Los Angeles.

Adam wants to be in her life, and slowly, Maele lets him in. He inspires her to face her fears, and she restores his faith in redemption. But with love comes sacrifice, and the goals they’ve worked so hard for may end up tearing them apart.

Book Two in the From Kona with Love series is set on the island of Kauai. Where the Sun Rises is a story about overcoming adversity, the promise of young love, and the valor in letting go.

Anna Gomez was born in the city of Makati, Philippines and educated abroad. She met and married her best friend who whisked her away to Chicago over twenty years ago. She is Chief Financial Officer for Leo Burnett Worldwide, a global advertising company founded in 1935. In her capacity, Anna serves on the board of several not-for-profit organizations, namely the Hugh O’Brien Leadership Organization and Girl Scouts of America. She is also the executive sponsor for a number of employee resource groups focused on Diversity and Inclusion.

Under the pen name Christine Brae, Anna has published six novels, has an established fan base, and a dedicated following. Her titles rank in the Top 100 months following their release. Her last three novels, In This Life, Eight Goodbyes, and The Year I Left, have won literary awards and were immediate bestsellers on Amazon, ranking #1 across multiple categories. Kristoffer Polaha is best-known for his long starring role in the critically acclaimed series Life Unexpected (The CW). Other TV series credits include Get Shorty with Ray Romano and Chris O’Dowd, the limited series Condor opposite William Hurt and Max Irons, The CW’s Ringer (Sarah Michelle Gellar) and Valentine, as well as North Shore (FOX).

In addition to co-starring with Rainn Wilson in Backstrom (FOX), he had a multi-season role on the acclaimed series Mad Men (AMC) and Castle (ABC). Polaha is also well-known for starring in Hallmark Channel movies such as Dater’s Handbook with Meghan Markle, and the Mystery 101 franchise on Hallmark Movies & Mysteries.

Polaha has a featured role opposite Gal Gadot in Wonder Woman 1984 and the forthcoming Jurassic World: Dominion.

Polaha was born in Reno, Nevada, and he is married to actress Julianne Morris. They have three sons.

"A sweet, closed-door, multicultural romance [that] will resonate with readers." —Booklist


“Gomez and Polaha craft a compelling, clean romance that centers not just on business ambitions, but the impact of deception, honesty, and change in relationships. Its story of love, not giving up, trust, and reinventing one's life grips readers with promise and hope for a different future. Moments Like This is highly recommended for romance readers looking for an exploration of the fine line between a woman's strength and her ability to accept the vulnerability and promise of love.” —Midwest Book Review