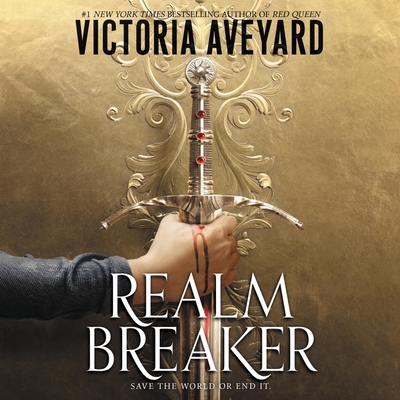 By Victoria Aveyard, Natalie Naudus (Read by)
$44.99
Email or call for price.

“A high stakes tale filled with everything you could want in a book: pirates, assassins, knights, magic, and the fate of the realm in the hands of unwilling heroes. Set in an enticing and dangerous land, an unlikely group is thrown together to take on a nigh impossible task so thrilling, I was unable to put this book down.”
— Katie Harveson, Front Street Books, Alpine, TX

Irresistibly action-packed and full of lethal surprises, this stunning new fantasy series from Victoria Aveyard, #1 New York Times bestselling author of the Red Queen series, begins where hope is lost and asks: When the heroes have fallen, who will take up the sword?

A strange darkness grows in Allward.

Even Corayne an-Amarat can feel it, tucked away in her small town at the edge of the sea.

She soon discovers the truth: She is the last of an ancient lineage--and the last hope to save the world from destruction. But she won't be alone. Even as darkness falls, she is joined by a band of unlikely companions:

A squire, forced to choose between home and honor.An immortal, avenging a broken promise.An assassin, exiled and bloodthirsty.An ancient sorceress, whose riddles hide an eerie foresight.A forger with a secret past.A bounty hunter with a score to settle.

Together they stand against a vicious opponent, invincible and determined to burn all kingdoms to ash, and an army unlike anything the realm has ever witnessed.