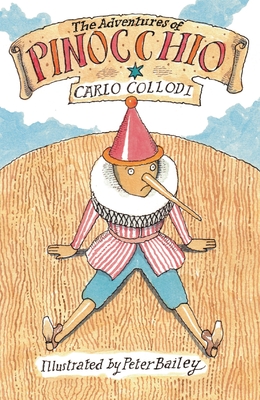 The story of a naughty wooden puppet who has a penchant for lying and dreams of becoming a real boy, The Adventures of Pinocchio has entered our collective imagination and fascinated generations of young and adult readers since its first publication in 1883. Part fable, part coming-of-age novel, part cautionary tale, Pinocchio's rollicking exploits through an unforgiving and often incomprehensible world – populated by unforgettable characters such as the Talking Cricket, Candlewick, Mangiafuoco and the Fairy with Turquoise Hair – have had a profound impact on our culture and attained universal significance as a mirror of the human condition.

Here presented in a brand-new and lively translation by Stephen Parkin and illustrated beautifully by Peter Bailey, this edition of The Adventures of Pinocchio brings extra sparkle to one of the greatest and most celebrated works of children's literature.

Carlo Collodi (born Carlo Lorenzini in Florence, 1826) was an Italian children's writer and most famous for his children's novel The Adventures of Pinocchio. Involved in political matters, he wrote satires during the Wars of Independence, going on to found a satirical newspaper Il Lampione (The Streetlight). He won fame with a novel, In Vapore, before focusing on children's literature as a way to explore political allegory. He began writing Storia di un burattino (Story of a Marionette), serialised in Il Giornale dei Bambine (The Children's Newspaper). This story would later come to be known as The Adventures of Pinnochio.
Collodi died in his native city in 1890, aged 63.

Peter Bailey was born in India and grew up in London. Since graduating from the Brighton School of Art, his extraordinary career has seen him illustrate books by some of Britain's best-known authors and poets, including Allan Ahlberg and Alexander McCall Smith. For twenty years he also taught illustration at the Liverpool School of Art.