The Gods of Green County (Hardcover) 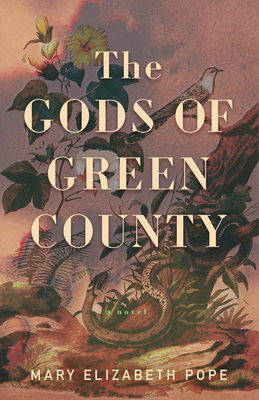 This is one of those nice surprises that come around once or twice a year. While technically not a mystery it does revolve around a murder and like the brilliant Mr. White's Confession by Robert Clark, an Edgar Award winner, straddles the fence between straight fiction and mystery. With understated eloquence the author, Mary Elizabeth Pope, takes us to tiny Rural Green county, Arkansas. It's 1926 and a man is killed. The rest of the book follows the consequences of that action and beautifully illustrates the hardscrabble lives of the depression era while exploring what really happened that one night.

Coralee Harper struggles for justice for her dead brother and her own sanity in Depression-era rural Arkansas.

In 1926 in rural Green County, Arkansas, where cotton and poverty reign, young Coralee Harper hopes for a family and a place in her community, but when her brother Buddy is killed by a powerful sheriff, she can't recover from his death or the injustice of his loss. When she begins to spot her dead brother around town, she wonders--is she clairvoyant, mistaken, or is she losing her mind?

What Coralee can't fathom is that there are forces at work that threaten her and the very fabric of the town: Leroy Harrison, a newly minted, ambitious lawyer who makes a horrible mistake, landing him a judgeship and a guilty conscience for life; an evangelical preacher and his flock of snake-handling parishioners; the women of the town who, along with Coralee's own mother, make up their own kind of jury for Coralee's behavior; Sheriff Wiley Slocum who rules the entire field, harboring dark secrets of his own; and finally, Coralee's husband Earl, who tries to balance his work at the cotton gin with his fight for family and Coralee's life.

When Coralee ends up in a sanity hearing before Judge Leroy Harrison, the judge must decide both Coralee's fate and his own. The chain of events following his decision draws him more deeply into the sheriff's far-reaching sphere of influence, and reveals the destructive nature of power, even--and especially--his own.

Mary Elizabeth Pope grew up in Michigan with roots deep in the Missouri Bootheel and Northeast Arkansas. She is Professor of English at Emmanuel College in Boston. She is the author of Divining Venus: Stories, and her work has been featured in the literary magazines Arkansas Review, Florida Review, Bellingham Review, Ascent, Passages North, and Fugue, among others. She holds a Ph.D. in English and Creative Writing from the University of Iowa. She lives outside Boston with her husband