The House on Vesper Sands (Paperback) 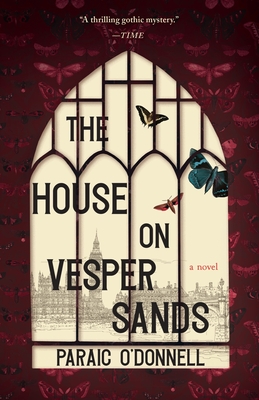 The story begins in 1883 London when a young seamstress, locked in a room at the top of a rich patron's home, finishing an elaborate dress, quietly opens a window stands on the sill and jumps head first into the gently falling snow. From there we are drawn into an elaborate conspiracy of a secret cabal with sinister plans. It's up to Scotland Yard Inspector Cutter, who will leave you chuckling at his bon mots and laser sharp intuition and his new sidekick, Gideon Bliss a shy former student at Cambridge who sees and interprets the clues the inspector misses. Together they form a team that is both formidable and hilarious and a force to be reckoned with in this very good start to what should be a very good series going forward.

“Paraic O’Donnell leavens the dark foreboding of a truly sinister, otherworldly mystery with distinctively clever storytelling and a decidedly marvelous cast of characters. You are in the best of hands with Inspector Cutter and Gideon Bliss on the case, along with the intrepid and resourceful reporter Octavia Hillingdon. Beautifully done!”
— Peter Sherman, Wellesley Books, Wellesley, MA

“This unnerving novel is delightfully creepy and features the best entrance into the detective game since Tana French. Classic mystery and horror tropes, and a pair of investigators as keen as they are funny.”
— Hannah Oliver Depp, Loyalty Bookstores, Washington, DC

London, 1893: high up in a house on a dark, snowy night, a lone seamstress stands by a window. So begins the swirling, serpentine world of Paraic O’Donnell’s Victorian-inspired mystery, the story of a city cloaked in shadow, but burning with questions: why does the seamstress jump from the window? Why is a cryptic message stitched into her skin? And how is she connected to a rash of missing girls, all of whom seem to have disappeared under similar circumstances?

On the case is Inspector Cutter, a detective as sharp and committed to his work as he is wryly hilarious. Gideon Bliss, a Cambridge dropout in love with one of the missing girls, stumbles into a role as Cutter’s sidekick. And clever young journalist Octavia Hillingdon sees the case as a chance to tell a story that matters—despite her employer’s preference that she stick to a women’s society column. As Inspector Cutter peels back the mystery layer by layer, he leads them all, at last, to the secrets that lie hidden at the house on Vesper Sands.

By turns smart, surprising, and impossible to put down, The House on Vesper Sands offers a glimpse into the strange undertow of late nineteenth-century London and the secrets we all hold inside us.

Paraic O’Donnell is the author of The House on Vesper Sands. He lives in Wicklow, Ireland with his wife and two children, and can usually be found in the garden.

Written with modern wit and a Dickensian sense of detail.
— Oprah Daily

Dickens is whirling enviously in his grave. . . . Read by a fire on a cold winter evening.
— The Irish Times

Shivery, suspenseful and altogether delicious, The House on Vesper Sands reads like the classic that Conan Doyle never got around to writing and marks Paraic O’Donnell as a conjuror worth following.

The most vivid and compelling portrait of late Victorian London since The Crimson Petal and the White.

Stellar. . . . Fans of Sarah Perry (not to mention Dickens and Wilkie Collins) will be captivated by this marvelous feat.
— Publishers Weekly, Starred Review

Twisty and serpentine—there’s so much to love here.
— Book Riot

Diabolical and delicious, this is the most enjoyable mystery I've read in years.
— Sandra Newman, author of The Heavens

Clever and funny, and exquisitely disturbing, it is an utter joy.
— Joanna Cannon, author of The Trouble with Goats and Sheep

Like the love child of Dickens and Conan Doyle, but funnier than both.
— Liz Nugent, author of Our Little Cruelties