Out of Darkness, Shining Light: A Novel (Paperback) 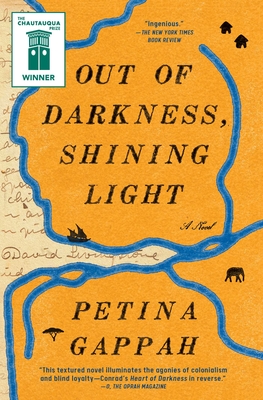 “Engrossing, beautiful, and deeply imaginative” (Yaa Gyasi, author of Homegoing), this epic novel about the explorer David Livingstone and the extraordinary group of Africans who carry his body across impossible terrain “illuminates the agonies of colonialism and blind loyalty” (O, The Oprah Magazine).

“This is how we carried out of Africa the poor broken body of...David Livingstone, so that he could be borne across the sea and buried in his own land.”

So begins Petina Gappah’s “searing…poignant” (Star Tribune, Minneapolis) novel of exploration and adventure in 19th-century Africa—the captivating story of the African men and women who carried explorer and missionary Dr. Livingstone’s body, papers, and maps, fifteen hundred miles across the continent of Africa, so his remains could be returned home to England and his work preserved there. Narrated by Halima, the doctor’s sharp-tongued cook, and Jacob Wainwright, his rigidly pious secretary, this is a “powerful novel, beautifully told” (Jesmyn Ward, author of Sing, Unburied, Sing) that encompasses all of the hypocrisy of slavery and colonization—the hypocrisy of humanity—while celebrating resilience, loyalty, and love.

Petina Gappah is a widely translated Zimbabwean writer. She is the author of two novels, Out of Darkness, Shining Light; The Book of Memory; and two short story collections, Rotten Row and An Elegy for Easterly. Her work has been short-listed for the Orwell Prize, the Sunday Times EFG Short Story Award, the Los Angeles Times Book Prize, the PEN/Open Book Award, the Frank O’Connor International Short Story Award, and the Prix Femina (etranger), among other honors. She is the recipient of the Guardian First Book Award and the McKitterick Prize from the Society of Authors. A lawyer specializing in international trade and investment as well as a writer, Petina currently lives in Harare, Zimbabwe.

“The real heroes of this carefully crafted novel are Halima and Wainwright and the other Africans history has hitherto condemned to suffer in silence. It is to the novel’s credit that after 150 years we can now hear their voices.”
—The New York Times Book Review

“We need novels like Gappah’s Out of Darkness, Shining Light, for they remember the stories that have been papered over by history—by whiteness and empire…stories like Halima’s and Jacob’s, told through Gappah’s expert characterization.”
—World Literature Today, Winter 2020 Book Reviews

"A fresh look at the enduring history of colonialism."
—The New York Times, 17 New Books to Watch For in September

“Based on Livingstone’s journals and narrated by his gossipy cook and a freedman with a messiah complex, this textured novel illuminates the agonies of colonialism and blind loyalty—Conrad’s heart of darkness in reverse.”
—O, the Oprah Magazine

“Searing, poignant, often hilarious…Out of Darkness, Shining Light beautifully evokes the moral ambiguities that lurk within the human heart, revealing a talent that continues to grow from book to book.”
—The Minneapolis Star-Tribune

"Glows with the insightful voices of the two servants and the strength of their devotion."
—Christian Science Monitor, Best Books of September

“Petina Gappah's novel is about exploration and adventure in nineteenth-century Africa—the captivating story of the loyal men and women who carried explorer and missionary Dr. Livingstone's body, his papers and maps, fifteen hundred miles across the continent of Africa, so his remains could be returned home to England and his work preserved there.”
—E! Online, 15 Books to Cozy Up with This Fall

"Gappah decolonizes the legend of Dr. Livingstone by turning the tale inside out, giving voice to those who are overlooked in the official narratives. The result is an indictment of the legacy of slavery and colonialism that is also an engrossing adventure story.”
—Library Journal, starred

“Fascinating … David Livingstone, as I learned from this novel, was this very complex individual who was an early British abolitionist—yet had slaves—who devoted his life to finding the source of the Nile. What Petina Gappah has done in this novel is write about what happened after his death.”
—Nancy Pearl, NPR, Four Fantastic Books For The End Of 2019

“In the characters of Halima and Jacob, [Petina Gappah] has created two voices whose authenticity and resonance provide both weight and vitality to this tale of darkness and light,”
—Lorna Kearns, Pittsburgh Post-Gazette

"Riveting ... a deeply layered exploration of courage, sorrow, and resilience, culminating in a revelatory quest and an entracing vision."
—Booklist

“An incredible and important book by a masterful writer.”
—Yaa Gyasi, author of Homegoing

“A powerful novel, beautifully told, Out of Darkness, Shining Light reveals as much about the present circumstances as the past that helped create them.”
—Jesmyn Ward, author of Sing, Unburied, Sing

“This is a beautiful novel.”
—Anthony Doerr, author of All the Light We Cannot See

“A sweeping epic that is also startlingly intimate, Out of Darkness, Shining Light is a revelation.”
—Christina Baker Kline, author of Orphan Train