If It Bleeds: Mr. Harrigan's Phone, The Life of Chuck, Rat (Mass Market) 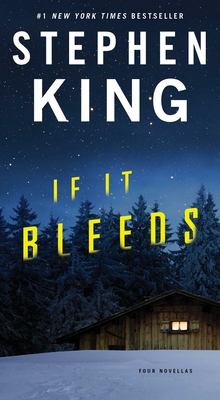 From the legendary storyteller and master of short fiction Stephen King comes an extraordinary collection of four new “exceptionally compelling novellas that reaffirm [King’s] mastery of the form” (The Washington Post).

The four brilliant tales in If It Bleeds prove as iconic as their predecessors. In the title story, reader favorite Holly Gibney (from the Mr. Mercedes trilogy and The Outsider) must face her fears, and possibly another outsider—this time on her own. In “Mr. Harrigan’s Phone” an intergenerational friendship has a disturbing afterlife. “The Life of Chuck” explores, beautifully, how each of us contains multitudes. And in “Rat,” a struggling writer must contend with the darker side of ambition.

If these novellas show King’s range, they also prove that certain themes endure. One of King’s great concerns is evil, and in If It Bleeds, there’s plenty of it. There is also evil’s opposite, which in King’s fiction often manifests as friendship. Holly is reminded that friendship is not only life-affirming but can be life-saving. Young Craig befriends Mr. Harrigan, and the sweetness of this late-in-life connection is its own reward.

“An adroit vehicle to showcase the…nature of evil” (The Boston Globe), If It Bleeds is “exactly what I wanted to read right now,” says Ruth Franklin in The New York Times Book Review.

Stephen King is the author of more than sixty books, all of them worldwide bestsellers. His recent work includes Fairy Tale, Billy Summers, If It Bleeds, The Institute, Elevation, The Outsider, Sleeping Beauties (cowritten with his son Owen King), and the Bill Hodges trilogy: End of Watch, Finders Keepers, and Mr. Mercedes (an Edgar Award winner for Best Novel and a television series streaming on Peacock). His novel 11/22/63 was named a top ten book of 2011 by The New York Times Book Review and won the Los Angeles Times Book Prize for Mystery/Thriller. His epic works The Dark Tower, It, Pet Sematary, Doctor Sleep, and Firestarter are the basis for major motion pictures, with It now the highest-grossing horror film of all time. He is the recipient of the 2020 Audio Publishers Association Lifetime Achievement Award, the 2018 PEN America Literary Service Award, the 2014 National Medal of Arts, and the 2003 National Book Foundation Medal for Distinguished Contribution to American Letters. He lives in Bangor, Maine, with his wife, novelist Tabitha King.

“As classic as [King’s] novels are, his shorter fiction has been just as gripping over the years...The true highlight of the collection is the phenomenal ‘The Life of Chuck’...Just when you think things are getting really weird, it all snaps together like an epiphany and you get to the gorgeous meat of the matter...Sure, King still owns the fright business like none other, but the iconic author will keep you up late at night engrossed in four tales about our dreams and our frailties.”
—Brian Truitt, USA Today

“IF IT BLEEDS contains four new, exceptionally compelling novellas that reaffirm [King’s] mastery of the form...the mid-length narrative suits his talents particularly well, permitting a degree of expansiveness while maintaining a controlled, disciplined approach to the material at hand. The results are stories that cover a surprising amount of emotional territory but can still be read in a sitting...a collection filled with startling, sometimes unsettling pleasures. In IF IT BLEEDS, King continues to draw from a rich and varied reservoir of stories. At its best, his work remains deeply empathetic and compulsively readable. May the reservoir never run dry.”
—William Sheehan, The Washington Post

“[These stories] — about the seductions and corruptions of technology, the extremes of beauty and depravity in even the most ordinary life, the workings of a universe we can never entirely understand — were somehow exactly what I wanted to read right now... ‘The Life of Chuck’ is one of the oddest, most affecting stories I have read in a very long time...As sirens blare outside my Brooklyn window and the headlines grow more apocalyptic by the day, I might start working my way through King’s backlist. He’s good company in the dark.”
—Ruth Franklin, The New York Times Book Review

"While this story collection had been percolating inside of Mr. King for years prior to its release, it is striking — sometimes eerily so — how necessary these stories feel today. 'If It Bleeds' continues the increasingly optimistic bent the author has displayed over the past decade, while still bearing those nightmarish touches at which he excels. When so much is uncertain, there’s no small amount of comfort to be found in these tales — and right now, comfort, in whatever form we can find it, is what we all need."
—Wendeline O. Wright, The Pittsburgh Post-Gazette

"There’s an oddly meta quality to reading Stephen King’s new collection, IF IT BLEEDS, in the era of COVID-19. In addition to the expected supernatural horror themes, the four novellas are undergirded, to great effect, with more earthbound fears: the uncertainty of old age and approaching death; the vampiric nature of the 24-hour news cycle feeding the public’s appetite for pain and disaster; the claustrophobia of being alone and ill during isolating weather; signs of the end times that would be disturbingly recognizable to even the most committed optimist...The jewel in the crown of IF IT BLEEDS, however, is the titular novella...King's choice to have an Outsider masquerading as a television reporter makes for an adroit vehicle to showcase the trite nature of evil."
—Michael Rowe, The Boston Globe

“Suspenseful and chilling…This set of novellas is thought-provoking, terrifying, and, at times, outright charming, showcasing King’s breadth as a master storyteller…a powerful addition to his megapopular oeuvre.”
—Booklist (starred review)

“The four never-before-published novellas in this collection represent horror master King at his finest, using the weird and uncanny to riff on mortality, the price of creativity, and the unpredictable consequences of material attachments...profoundly moving...King clearly loves his characters, and the care with which he develops their personalities draws the reader ineluctably into their deeply unsettling experiences. This excellent collection delivers exactly the kind of bravura storytelling King’s readers expect."
—Publishers Weekly (starred review)