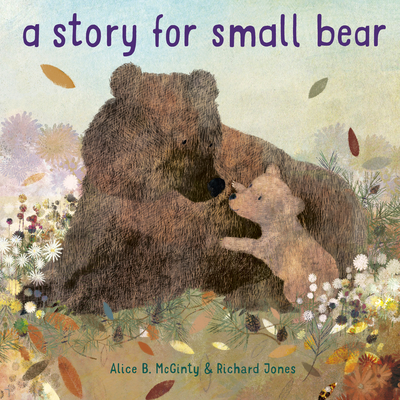 By Alice B. McGinty, Richard Jones (Illustrator)
Interested in this title? Email us for more information!
Special Order

In this sweet, lyrical picture book, perfect for bedtime, a playful cub prepares for hibernation, saving just enough time for Mama to share a story before they must settle down.

Autumn is ending and a chilly breeze is drifting in, which can mean only one thing-- it's time to hibernate over the long winter. But before Small Bear does, she'd like for Mama to tell her some stories. Mama agrees, with one condition: all the preparation must get done-- no dilly, no dally. So Small Bear tries to be good, venturing off to find sprigs for her winter bed, splishing and splashing in the stream, and climbing up, up, up into the tall forest trees in search of acorns. When she finally returns home, Small Bear snuggles down with Mama in their den. Did she make it back in time? "You did," Mama answers, and pulls her in close. And then Mama tells the most wonderful tale of a little bear--just like Small Bear--who, while enjoying the world around her, saved just enough time for stories.

ALICE McGINTY is the award-winning author of over forty books for children, including Darwin, an Orbis Pictus Honor Book and one of Booklist's Top 10 Biographies for Youth. Her picture book, Rabbi Benjamin's Buttons, was named a Sydney Taylor Notable Book. Kirkus Reviews called her most recent title, The Girl Who Named Pluto, "an inspiring and beautifully illustrated tale" in a starred review. She also runs a writing camp for kids, Words on Fire. Visit her on the web at alicebmcginty.com or follow her on Twitter @AliceBMcGinty.

Richard Jones has over 15 years experience in creative arts, and has recently begun illustrating children's books. He is the illustrator of Town Mouse, Country Mouse by Libby Walden, a reimagining of Aesop's fable. His title Whale in a Fishbowl recieved four starred reviews and was a Kirkus and New York Public Library Best Book of 2018. He was nominated for the Ezra Jack Keats Award for New Illustrator in 2019. Visit him on the web at paintedmouse.com or follow him on Twitter: @apaintedmouse

Praise for A Story for Small Bear:

“The perfect book for fall, A Story for Small Bear has a simple message: Winter may be coming, but everything will be all right. Our house is cozy, you are safe, and we have plenty of stories to keep us company as we ride out the cold together.” —BookPage

Praise for Alice B. McGinty's The Girl Who Named Pluto:

"An inspiring and beautifully illustrated tale made all the better by its historical foundation." —Kirkus Reviews, starred review

Praise for Richard Jones's Whale in a Fishbowl:

"This subtle, satisfying narrative will be especially appealing to introspective readers who yearn for something that's perhaps yet unknown." —Kirkus Reviews, starred review

"The tale of how the solitary Wednesday discovers the sea and her destiny is heartwarming, and readers will cheer for her." —Booklist, starred review

"By reaching for emotional rather than documentary truth, this team explores the injustice of captivity with a gentle touch." —Publishers Weekly, starred review

"This moving tale of longing and belonging is sure to prompt introspection, likely making it a popular choice for independent reading as well as reading aloud." —The Bulletin, starred review