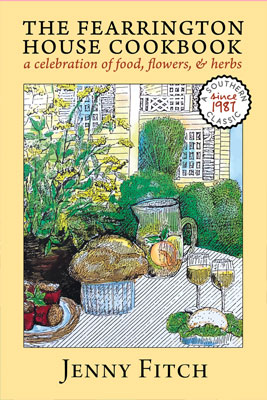 Fearrington House, on the old Fearrington Farm south of Chapel Hill, North Carolina opened as a restaurant in May 1980. Under the direction of Jenny Fitch and a succession of gifted chefs, it soon became known as one of the great restaurants of the American South. This book brings together for the first time some of the recipes that have found most favor over the years at Fearrington House, and some of the flower arrangements that have done much to give the restaurant its distinctive charm.

Recipes in this book range from downhome favorites like sausage pinwheel biscuits and Brunswick stew to Continental-style delicacies like cream of Vidalia onion soup and poached salmon with cucumber dill mayonnaise. Sauces range from the familiar Mornay and Madeira to such Fearrington House specialties as brainsed scallion sauce and lemon parsley sauce. Desserts abound, from simple ice cream dishes to the restaurant's widely known favorite, chocolate souffle with chocolate sauce and whipped cream.

The book is arranged by season, with six full menus for each season. Also included for each season are time-tested arrangements of flowers (and weeds), tips for cooking, gardening, and flower arranging, and ideas and instructionsfor such seasonal projects as preparing a honeymoon basket (spring), making herb oils and vinegars (summer), and forcing blossoms (winter).

A celebration of the seasons, this book of food and flowers is the next best thing to dining at the Fearrington House itself.

A native of North Carolina, Jenny Fitch was instrumental in converting The Fearrington House from a farmhouse into a widely acclaimed restaurant. As its owner, she oversaw menu selections, flower arrangements, and interior design that give the Fearrington House its distinctive ambiance.